Can a Husband Write a Wife out of Will, What Can a Wife Do and Loopholes

A husband can write a wife of the will. However, the wife will still have the right to her elective share, unless there was a prenuptial or postnuptial agreement.

When a husband writes a wife out of the will, she will still have the right to one-third of their estate. People leave their wives out of wills sometimes, such as in cases of writing the wife out in favor of children from a prior marriage. The wife will have a right to an “elective share” of the first $50,000 or 1/3 of an estate if the person who died had children, or the first $50,000 or ½ of the estate if the person who died did not have children. [2]

The wife will also have the right to file a proceeding contesting the will that leaves her out or diminishes her share.

How a husband can write a wife out of a will

A husband can write a wife out of a will but if they are concerned that the wife will try to contest the will after their death, the husband needs to make sure that the will is as solid as it can possibly be under the circumstances. 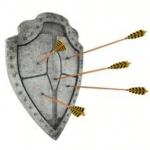 New York law states that to make a valid Will, a person must know who their relatives are and what their assets are. So even if someone is suffering from a medical condition that is affecting the brain, such as Alzheimer’s or degenerative brain decease, or someone has dementia, they may still have the capacity to make a will.

Straight-forward wills that the entire family agrees with do not present a problem even if the person making a will has diminished capacity. But where some relatives are excluded over others, or when the will-maker is changing a prior will to someone’s detriment, defensive drafting is essential.

Defensive will drafting is the key to writing a wife out of a will. The first step is to identify a situation where the will execution may be susceptible to a will contest from the wife. Like doctors, attorneys don’t always get perfect cases. For example, there are times when a husband with diminished capacity wants to execute a will, even to write the wife out.

Defensive will drafting starts with the phone call requesting the appointment. We prefer that husbands who make such wills request their own appointments – when the caller requests an appointment for someone else, we get suspicious. Again, it does not mean that we will automatically turn that person away, but it does mean there will be some more prodding and security measures.

Similarly, if the husband is an older person, or someone with an illness that affects their mental state, and is brought in by someone who is benefitting from a will, we do naturally get suspicious and more prodding ensues. If the hisband came in with someone else, we ask the chaperone to stay outside and do not allow them into the office when we are interviewing the client.

When the will maker comes in, the attorney gives a “visual exam” similar to the way a doctor would (without touching the client, obviously). The attorney then asks questions about current events to make sure that the potential will maker is “alert plus one”. The estate attorney also asks about the testator’s family (possibly making a family tree) and assets, to make sure that the person knows what their family and assets are, as is the requirement of New York estate law.

We ask the husband about their medical condition, but if the husband who comes in is alert +1 and is able to talk about their family and assets, New York law states that they have the capacity to make a will.

If the husband has a medical condition, or is older, or is documented to have diminished capacity, a video of the execution of the will may be good practice but it could also backfire.

As a New York estate practioner, it is good practice to take detailed notes on a will execution. We may decide to ask the husband to create a family tree with the will-maker and have them sign it to make sure that no heir has been left out of the will unintentionally that might come back after the decedent’s death and contest the will. We talk to the husband and find out why they are writing the wife out of the will and document the answer.

“Loopholes” claiming that there is no money in the estate

There are ways that people try to plan their estate in order to exclude their spouse and take money outside of the estate in an attempt to avoid the elective share. New York lawmakers are aware of those attempts and have done their best to close those loopholes. [4]

Property Transferred Within a Year of Death – Property transferred within a year of death is considered subject to the spousal rights of elective share in New York. The defenders of the will are going to claim that the decedent does not own the property and it’s not a part of the estate and not subject to the estate rules, but the claim is not likely to work, as New York law has a “claw-back” provision whereby the surviving spouse can recapture the property gifted by the decedent and taken out of the estate within a year of his death. Such property is considered to be a part of the “augmented estate” for the purposes of calculating the amount of elective share due to the surviving spouse.

Property passing outside of probate – The other heirs may claim that some of the property of the person who died is not a part of their estate. While it is technically true that “testamentary substitute” property is not a part of the probate estate, it is nevertheless a part of the “augmented estate” and is therefore countable towards calculating the elective share that the surviving spouse is entitled to. This property includes joint bank accounts, assets transferred to trusts, pension plans insurance policies where the surviving spouse is not the beneficiary.

“Loopholes” claiming that the spouse is disqualified

Loophole 2: “you abandoned the spouse” – abandonment [5] is a loophole that is sometimes used to try to invalidate the elective share claim. It often comes up when the deceased spouse and the surviving spouse were in the process of divorce but the deceased spouse died before the divorce could be completed. Needless to say, an incomplete divorce is not divorce so the spouse is still entitled to an elective share unless the other heirs can successfully prove abandonment. Just proving that the couple did not get along is not enough, even if they no longer lived together at the time of the deceased spouse’s death.

In order to qualify for a spousal right to an elective share, the electing spouse has to file a Notice of Election within six months of the appointment of the executor of the estate, and within two years of the death of the decedent. This is a strict statutory deadline. There are some situations where missing the deadline is excusable, but mostly it is not. There is no reason to miss this deadline; it’s a very simple paper to file. There are documents that come later that are more complicated, but this one is intentionally made easy so that people don’t put it off. Blowing the deadline to File a Notice of Election almost always means losing the right to file an elective share.

The right to the spousal set aside

The wife’s right to contest the husband’s will

When a surviving spouse gets disinherited or their share is diminished, they often bring a will contest based on one or more of the following allegations:

In contesting a Will, the surviving spouse accuses those who benefit from the will of interfering with the deceased spouse’s natural wishes to include his spouse in his estate plan.

Easiest case scenario of elective share for the wife – wife files a Notice of Election, the executors of the estate don’t dispute and don’t try to find loopholes and just give the wife who was written out of the will the entire elective share (hasn’t happened yet in my practice, but hope springs eternal).

The Typical Scenario – Husband wrote wife out of a will in favor of children from the first marriage. Children try to use a loophole and claim that the spouse who died transferred property to children from their first marriage before their death, tell the wife that there is no money to in the estate to claim against. She contacts a New York estate lawyer (me), learns that any money gifted by the decedent within a year before his death is considered a part of the estate for the purposes of calculating the elective share, and the court accepts that argument (because it’s the law).

“Zeroing out” the estate – executor, son of the decedent, claims that a multi-million dollar estate somehow owes money than it has. A contested accounting proceeding ensues, where the wife and the executor have disagreement over the numbers.

New York elective share, will execution and will contest laws can be complicated, and experience in the Surrogate’s Court practice is paramount when dealing with those situations. Call the Law Offices of Albert Goodwin at (212) 233-1233 and make an appointment to discuss a situation where a husband writes a wife out of the will.