Does a Police Officer Have to Prove You Were Speeding 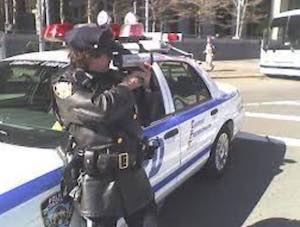 Speeding is one of the most common traffic tickets. If you have received one, you are probably wondering does a police officer have to prove you were speeding. The quick answer is yes. The prosecution has to prove its allegation of speeding. The burden of proof is on the police.

The police officer does not have to show you proof of speeding on the spot. They would have to prove it in court.

The police can use your testimony against you. This is why it’s important to not talk to the police on your own. Instead, demand you speak to a lawyer, and call a lawyer immediately. If you are looking for a lawyer, we at the Law Offices of Albert Goodwin are here for you. You can call us at any time at 718-509-9774 or 718-509-9774. You can also send us an email at attorneyalbertgoodwin@gmail.com.

The level of proof required depends on whether you received a speeding ticket in New York City (all 5 boroughs), Rochester, or Buffalo, or the rest of the New York State. In NYC, the case is heard before the NYS Department of Motor Vehicles Traffic Violations Bureau (TVB) (which is an administrative tribunal and not a court), and in this case, the level of proof required is the clear and convincing evidence standard. For the rest of the state of New York, the case is heard before courts and the burden of proof required must be beyond reasonable doubt (similar to criminal proceedings). This is a very high level of proof where the prosecution has to prove, without a doubt, that, first, you were the operator of the vehicle, and second, you were speeding. If you have any doubts about the violation, you should contest it. It will save you hundreds of dollars in fines and an increase in insurance premiums.

How Does a Police Officer Prove You Were Speeding

If you have a traffic ticket for speeding, you are now possibly thinking, ‘can you dispute this traffic ticket? How does a police officer have to prove you were speeding?’

To know how a police officer proves you were speeding, we first need to determine how the police measures speed. In New York, police officers use five types of methods:

The vehicle-mounted stationary radar is attached to the car. Once the police car is parked, the device measures the speeds of the cars and alerts the police officer of a speeding car. There can be several issues with this type of radar, such as the impossibility of this radar to read several lanes of traffic on a multi-lane road.

The fixed moving radar is attached to the vehicle and measures the speed of the speeding vehicle in relation to a moving car.

In pacing, the police officer follows the speeding car and compares its speed with that of the speeding car. In this case, it is always important to maintain the same distance all throughout in order to have an accurate estimate. In addition, the estimated speed becomes less accurate, the farther back the officer’s car is.

In visual estimation, the police officer must have special training from a police academy to determine a car’s speed simply by visually watching a video or a road and comparing the various speeds of the cars. The police officer’s testimony, akin to an expert witness, is presented to prove you were speeding.

These speed cameras take pictures of the license plate of the speeding car. However, it cannot determine the driver, and for this reason, this does not carry any points. The ticket is merely shipped to the registered owner of the car for payment of the fine.

All these different methods of measuring speed have weaknesses in their accuracy. For example, if the police officer used a radar, the prosecution must show that:

The police officer must also testify on

Other Defenses Available for Allegations of Speeding

There are also other defenses available in a speeding ticket, such as:

Where Will the Trial Take Place (Venue)

In determining how the police officer can prove that you were speeding, the venue of the trial is also important. As mentioned, if you received a speeding ticket in NYC, your trial will be with the TVB, as opposed to other areas of New York state where a trial will be before regular traffic courts. In TVB, there is no plea bargaining, the evidence required is clear and convincing, and there is no pre-trial discovery. In regular traffic courts, plea bargaining is available, the evidence required is proof beyond a reasonable doubt, and there is pre-trial discovery. For these reasons, it is always recommended to hire a lawyer when appearing before the TVB.

Traffic lawyers can use strategies with the TVB that are not readily available when you are appearing by yourself. For example, the attorney can request for an adjournment and delay the trial date as far back as possible into the future in order to avoid the speeding ticket’s negative consequences. Pushing the trial date back could help you gather evidence, research speed equipment from the instruction manual, and make witness arrangements. It also helps increase the chances of the police officer not being available to show up for trial on the pushed-back date. A no-show can be a ground for dismissal.

There are several ways a traffic court lawyer, like us, can help if you are asking does a police officer have to prove you were speeding. If you need assistance, we at the Law Offices of Albert Goodwin are here for you. We have offices in New York, NY, Brooklyn, NY and Queens, NY. You can call us at 718-509-9774 or 718-509-9774 or send us an email at attorneyalbertgoodwin@gmail.com.