How To Disinherit Someone and Do it Well 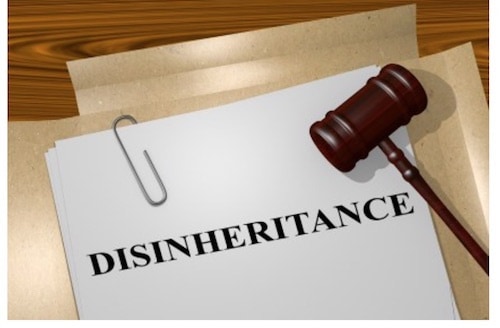 You may wonder how to disinherit your child, spouse, or another relative. Generally, disinheriting someone refers to completely excluding from one’s will an heir entitled to inherit under the state’s intestacy laws. For example, in New York, under Estates, Powers & Trusts Law (EPTL) § 4-1.1, descent and distribution of a decedent’s estate is provided in case the decedent died without a will. For example, if the decedent died with a spouse and children, the spouse receives $50,000 plus ½ of the estate, while the balance goes to the children. In this case, if one child receives absolutely nothing in the will, he is considered disinherited.

One thinks of how to disinherit a child for a number of reasons: he may be estranged from his child; he may think another child needs more financial assistance than the other; or he may feel that he has given his child enough financial assistance during his lifetime. Regardless of the reason, what matters, if you are reading this article, is how to disinherit a child effectively.

Generally, you can completely exclude the child from the will to disinherit a child. You can even give your reason for completely excluding the child in the will. However, a child may contest the will, believing he is entitled to inherit, and attack the will’s execution and genuineness. The child may be successful in contesting the will.

Although an heir can still challenge a trust, the heir is not entitled to notice about the existence of a trust because a trust is private. In contrast, in probating a will, an heir entitled to inherit in the absence of a will (such as the people enumerated in EPTL § 4-1.1 in New York) is entitled to notice and has the right to contest the will before the courts.

Some people also wonder how to disinherit a spouse and whether disinheriting a spouse is the same as disinheriting a child. Unfortunately, in New York, it is quite difficult, but not impossible with proper estate planning, to disinherit a spouse. Under EPTL § 5-1.1-A, a surviving spouse has a personal right of election to take a share of the decedent’s estate, when he or she receives something lesser in the will. The spouse’s elective share is equal to the greater of $50,000 or if the net estate is less than $50,000, 1/3 of the net estate.

In the actual case of Hugh Hefner, founder of Playboy magazine, he completely excluded his current wife of 6 years, Crystal Harris, from his will, leaving his entire estate of $55 million to his four children. How did he completely disinherit his spouse? EPTL § 5-1.1-A(e) provides that a spouse may waive or release their right of election against a particular or any last will or testamentary substitute. Such waiver or release of right of election can be made in a prenuptial agreement. In the case of Hugh Hefner, he was able to completely exclude his current wife, Crystal Harris, from his will because Crystal Harris signed a prenuptial agreement waiving her right to her spousal share.

The difficulty in disinheriting a spouse lies, not only in the spousal right of election, but also the fact that, in computing the decedent’s estate for purposes of spousal right of election, testamentary substitutes are included. Testamentary substitutes, under EPTL § 5-1.1A(b) include gifts made by the decedent in contemplation of death or within one year of death, bank accounts in trust for another person, joint bank accounts to the extent of decedent’s contribution, property under joint tenancy with rights of survivorship or tenancy by the entirety to the extent of the consideration contributed by decedent, property where decedent retained a life estate, retirement accounts, properties in which decedent held a general power of appointment, and transfer of securities on death. In the case of Matter of Lipton, 2020 NY Slip Op 32435 (U), decedent was a lifetime income beneficiary of the trust and discretionary principal beneficiary. The surviving spouse argued that payments made by the trust to decedent’s children within one year prior to decedent’s death should be included in her spousal share. However, the court held that only the actuarial value of the future income of the trust which decedent had relinquished should be included in the computation of estate for purposes of determining the spousal share. In that case, the trust principal was not included in the computation.

For these reasons, when one questions how to disinherit a spouse, case law shows that transfer of assets to a trust can lower the probate estate for purposes of determining the spouse’s elective share. However, if the decedent is the income beneficiary of the trust, payments made by the trust to the decedent are considered testamentary substitutes.

The question of disinheriting a spouse normally arises in blended families where it is the second or third marriage for the spouses. The decedent normally would like to protect their biological children to ensure that their children would receive the bulk of their estate and not their spouse who might have other children from a previous marriage. When the bulk of the estate goes to the spouse who has former children, when that spouse dies, it goes to that spouse’s children from a former marriage. Because of this discrepancy, proper estate planning is important to ensure that disinheriting a spouse (or at least producing that same effect) can be made effectively.

If you are considering executing a will and disinheriting an heir, it is recommended that you seek the advice of legal counsel in order to ensure you can do it effectively. Doing it effectively can save your estate thousands of dollars in defending any will contest that might arise after your death, filed by the disinherited heir. Should you need assistance, we, at the Law Offices of Albert Goodwin, are here for you. We have offices in New York, NY, Brooklyn, NY and Queens, NY. You can call us at 718-509-9774 or send us an email at attorneyalbertgoodwin@gmail.com.