How to Prove a Will is Fake 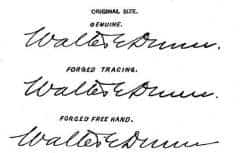 If you want to prove that a will is fake, a good place for you to start is to take a copy of the will to an estate lawyer. If you suspect a fake will, it is probably because the will was found in suspicious circumstances and something feels not right about it. Attorneys see wills in court all the time and we also draft wills, so we have a natural feel for what a real one should look like, as well as the experience to tell which will is a forgery.

If you are looking at how to prove that a will is fake and would like to consult an attorney, you can send us an email at attorneyalbertgoodwin@gmail.com.

Here are some of the red flags that would help you prove the will is fake:

Assembling a “Catalog” – When we set out to prove that a signature on a will is fake, one of the techniques we use is called “assembling a catalog.” We assemble a catalog of signatures that we think are the decedent’s authentic signatures from the same time period to compare to the signature that is allegedly a forgery. We get those signatures from other legal documents, checks, etc. that the decedent signed. The more signatures, the better, to compensate for different inks, pens, time of day and other variables.

Unfortunately, sometimes we end up assembling a catalog of signatures that are inconsistent from document to document, making it harder to show that the signature on the will deviates from the decedent’s “standard” signature. Another problem that may come up is when the authenticity of the “catalog” signatures can also be in question, such as when grown children sign their elderly parents’ checks. But in most cases, a catalog is a good point of reference in comparing a suspect signature to the decedent’s previous signatures that we know to be authentic.

Computer-Aided Analysis – In a forensic analysis of a signature, handwriting experts take a high-quality photograph of the signature and magnify the signature on a computer. Sometimes just magnifying a signature makes a forgery obvious. Other times, reversing the colors (white is black and black is white) or applying a filter makes a forgery really stand out. This graphic display is important when trying to convince a jury that a signature is a forgery.

Signs of a the Will is Fake

When you see a fake will, you often have a feeling that something “doesn’t feel right” but you can’t quite put your finger on it. This “not right” feeling is usually produced by a number of red flags:

People’s signatures are not as unique as they used to be. The more hand-writing gets out of fashion, the more people’s handwriting skills are deteriorating. There used to be individual hand-writing styles, and that individuality is getting lost with the lack of proficiency. Most people don’t even use script anymore, but print their letters instead. Handwriting is starting to look more and more uniform and is losing its individuality. This adversely affects the ability of an expert to prove a fake signature.

A will prepared without an attorney is more likely to be a forgery than a will where an attorney was involved. If the will that you are examining does not have an attorney’s name on it, such as a form will that was purchased in an office supplies store or downloaded off the internet, the chance of forgery is greater. An attorney-supervised will would have the estate attorney’s name and would have a notarized self-proving affidavit of the witnesses who attested the will. While it is still possible for someone to make a fake ID and appear at an attorney’s office claiming to be the decedent, forgery is less likely when the will is supervised by an attorney.

Improper Will Execution – If a will is fake, that usually means that the will was made without the formalities required for a valid will, such as the decedent declaring it to be their last will and testament and having two witnesses. So in addition to suing for forgery, we’d also sue for improper execution, which gives us more options in setting aside the will.

If you want to know how to prove that a will is fake, we at the Law Offices of Albert Goodwin are here for you. We have offices in New York, NY, Brooklyn, NY and Queens, NY. You can call us at 718-509-9774 or send us an email at attorneyalbertgoodwin@gmail.com.