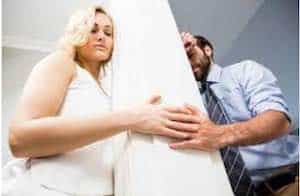 It sometimes happens that after spouses separate, they realize that they are better off together.

Perhaps absence made their hearts grow fonder, and for this reason, there was marriage reconciliation after separation.

There can generally be four types of marriage reconciliation:

When spouses physically separate (meaning, they begin living in separate households), the effect of marriage reconciliation would depend on whether they have initiated any legal process to separate. This legal process could be either entering into a legal separation agreement or filing for divorce. If they have not initiated any legal process to separate, then even if they live in separate households, they are still considered husband and wife. If they reconcile, there is no change to their legal status because their physical separation never changed their legal status in the first place.

For example, Husband and Wife get married in 2019 and decide to separate in 2020. They start living in different households. If they reconcile in 2021, there is no change in their legal status. They are still considered husband and wife because they were never not husband and wife, having never initiated any legal process for their legal separation or divorce.

For example, in the separation agreement, Wife waived her right to her elective share because there had already been a marital division of property. In New York, the elective share prevents a spouse from being completely disinherited by the other spouse. Under Estates, Powers, and Trusts Law § 5-1.1A, a surviving spouse is entitled to take the greater of $50,000 or one-third (1/3) of the deceased spouse’s net estate.

Marriage reconciliation after filing for divorce

When spouses reconcile after filing for divorce but before the divorce is finalized, spouses should make the decision on whether they would like to discontinue the divorce proceedings. If this is the case, then the spouses can enter into a stipulation for the discontinuation of the divorce proceedings for approval of the court. If no responsive pleading has been filed, or within 20 days from date of service of the notice of claim, Rule 3217(a)(1) of New York’s Civil Practice Law and Rules generally allows a party to withdraw the divorce claim without court order.

Marriage reconciliation after a divorce decree is issued

Once a divorce decree has been issued, the former spouses are now legally single. Any marriage reconciliation does not affect their status of being legally single. If the former spouses would like to return to their former status of being married, they need to get married all over again. However, all matters adjudged in the divorce decree still stands, such as marital division of property and child support. After the divorce decree, spouses, however, can enter into a pre-nuptial or post-nuptial agreement relating to the ownership of their properties.

If you have family law issues, considering marriage reconciliation during legal separation, or thinking of divorce, we at the Law Offices of Albert Goodwin are here for you. We have offices in New York, NY, Brooklyn, NY and Queens, NY. You can call us at 718-509-9774 or send us an email at attorneyalbertgoodwin@gmail.com.