What Does Intestate Mean? 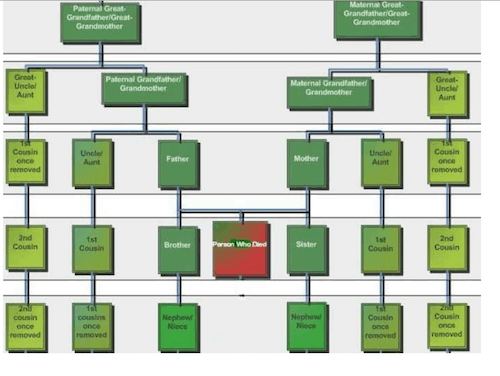 What does intestate mean as a status or condition?

Although dying intestate normally refers to dying without a will, dying intestate can still happen even if there’s a will. When one executes a will, but does not provide for the distribution of all his assets in the will (such as the absence of a remainder clause), then such person has died intestate with respect to the property not covered by the will.

For example, Michael’s sole property when he died was $100,000 in his bank account with no debts. We assume that $100,000 was his net estate Michael was unmarried, but had a child out of wedlock who he was estranged with, Christopher, and survived by his parents, Linda and John. Michael suddenly died at age 30 because of a car accident and so, he had left no will. Who is entitled to the property under the rules on intestate succession in New York?

Under EPTL § 4-1.1, if the deceased dies, leaving descendants (another term for issue), the entire estate goes to the descendants. In this case, since Michael had a child, Christopher, even if he was estranged with Christopher, Christopher receives the entire $100,000, precluding his parents, Linda and John, from receiving anything.

In the same example above, let’s assume that Michael was survived by his spouse, Sarah, his children, Christopher and Christine, and parents, Linda and John. Michael died intestate. Who is entitled to Michael’s estate? Given this scenario, Michael’s spouse, Sarah will get $75,000, which is $50,000 plus ½ of the remaining balance equivalent to $25,000). Christopher and Christine will share $25,000, and get $12,500 each. Michael’s parents, Linda and John, will not receive anything.

What does intestate mean when it refers to an heir?

Let’s explore further the example above where Michael left a will, leaving his coop to his son, Christopher, and his brownstone in Brooklyn to his wife, Sarah. Michael did not have any provision in his will regarding the condominium in Queens. Assuming the condominium in Queens is worth $250,000, and Michael is survived by his parents, Linda and John, his wife, Sarah, and his children, Christopher and Christine. Who are Michael’s intestate heirs in this case where he left a will? His intestate heirs with regard to the Queens condominium are Sarah, Christopher, and Christine. If the Queens condominium was sold, Sarah would receive $150, 000 (which is $50,000 plus ½ of the remainder equivalent to $100,000), while Christopher and Christine will receive $50,000 each.

The above rules apply to a deceased who resided in New York before he died without a will. If want to know, ‘what does intestate mean’ or need help in determining who the intestate heirs of your loved one are, we, at the Law Offices of Albert Goodwin, are here for you. We have offices in New York, NY, Brooklyn, NY and Queens, NY. You can call us at 718-509-9774 or send us an email at attorneyalbertgoodwin@gmail.com.