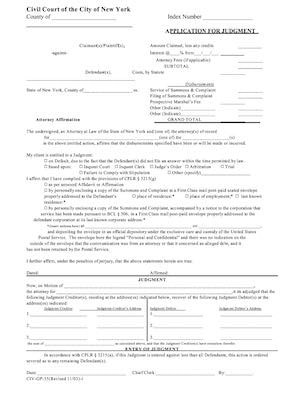 The judgment creditor can also record its judgment with the county clerk’s office and any land or real estate recorded in the name of the judgment debtor in that county will be subjected to that judgment. This is what a judgment lien is all about. Generally, once that lien is filed with the county clerk, the land cannot be sold unless the money judgment is paid. In rare cases where such land has been sold and the judgment debtor has not used the proceeds to pay off the money judgment, such judgment lien still exists against the new owner and the new owner has to pay the debt in order to release the property from the lien. Any judgment lien that is recorded puts the public into notice that such land is subjected to a lien.

For example, John borrowed $20,000 from his (former) friend, Michael, promising to pay after three (3) months. John did not pay. Michael made several attempts to collect from his friend, John, but John disappeared, did not answer his calls anymore, and was always not home. Michael then filed a case against John in the New York County Civil Court because he lived in Manhattan. John was sent summons, but he did not appear before the court. Michael was able to secure a money judgment against John. John owned a co-op in Manhattan, an apartment in Brooklyn, and a house in the Hamptons.

Does Michael have a judgment lien against John? No. He only has a money judgment. Since the case was decided by the New York County Civil Court, the lower court’s judgment transcript has to be filed with the county clerk in order for a judgment lien to be created.

Suppose that Robert did his due diligence and knows that the property is still subject of a mortgage with remaining balance of $135,000 and a judgment lien if $20,000. Robert agreed with John that the proceeds of the payment will be used to satisfy the property lien (by virtue of the mortgage) and the judgment lien first, and John agreed. Can Michael, the judgment debtor, demand that payment of the entire $20,000 be made to him? No, because the property lien of $135,000 is superior to the Michael’s judgment lien of $20,000. Robert should pay off first the $135,000 for the mortgage, and the remaining $15,000 shall be paid to Michael with a deficit of $5,000 which Michael can get from the other judgment liens in Kings and Suffolk counties.

Other Consequences of Judgment Liens

To know what a judgment lien is is to know when a judgment lien expires. In New York, the statute of limitations in enforcing money judgments is 20 years. A judgment lien, once recorded, is valid for 10 years, and can be extended for another 10 years.

In New York, there are several properties that are exempt from execution of a money judgment. Under New York Civil Practice and Law Rules (CPLR) § 5205 and 5206, several personal and real properties are exempt from satisfying a money judgment. Depending on the county, the homestead protection law exempts homes from execution in amounts ranging from $75,000 to $180,000, an amount which can double for married couples. This amount is adjusted every three years. Generally, judgment creditors don’t execute on homes of judgment debtors because the pre-recorded lien on an existing mortgage coupled with the homestead exemption can leave the judgment creditor with little to none, unless the judgment debtor has enough equity in the property to cover the judgment.

If you are wondering what a judgment lien is, you need to enforce a judgment, or to deal with judgment lien entered against you, we, at the law offices of Albert Goodwin, are here for you. We have offices in New York, NY, Brooklyn, NY and Queens, NY. You can call us at 718-509-9774 or send us an email at attorneyalbertgoodwin@gmail.com.