What is an Affidavit and What is its Use? 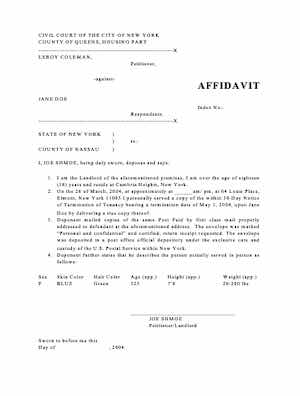 You might at one point in your life have had to execute an affidavit. The first step in the process would be to understand what is an affidavit and what is its use?

An affidavit is a sworn statement by a person (who is called an affiant), made before a person authorized to administer oaths, stating certain facts and information under penalty of perjury. You might have seen movies and TV series depicting witnesses on the stand in a courtroom. A person always says, ‘Do you swear to tell the truth and nothing but the truth?’ An affidavit is similar to witness testimony, except for the fact that an affidavit is in written form. Similar to witness testimony, if you make a false statement in an affidavit, you can be prosecuted for perjury. For this reason, statements made in an affidavit should be truthful and about facts that you have personal knowledge of. What is personal knowledge? Personal knowledge refers to a circumstance or fact, gained through your own senses, something you have seen, heard, touched, smelled, or tasted.

Basic Components of an Affidavit

When you wonder, ‘what is an affidavit,’ you might also be interested in how to write an affidavit. An affidavit has four basic components:

The first part is as simple as saying, ‘I, (insert name), being duly sworn, deposes and says…” The fact that the document is sworn means that you can be prosecuted for perjury for any false statement stated in the affidavit.

The third part is your signature. It is important because it shows that you have read the affidavit and are signing it, knowing that you are declaring the information set forth in the affidavit as the truth.

Where the Affidavit Can Be Used

Affidavits have been used in many instances. A process server who serves summons and complaints executes an affidavit of service, which sets forth the manner in which the documents have been served to the other party. In last wills and testaments, a self-proving affidavit of the witness eliminates the need for the witness to come to court to testify that the testator signed the will willingly, of his free and voluntary act, and that the testator was of sound mind, and under no constraint or undue influence. When a vital legal document is lost, such as your passport, some countries require the affidavit setting forth facts regarding the lost document. In certain court proceedings, affidavits are also used in lieu of oral witness testimony, such as in support of written motions.

When signing an affidavit, it is important that you read it carefully to ensure that all the facts stated therein are true and correct to the best of your knowledge and belief. This will minimize any risk of perjury. If in doubt, consult with a lawyer. Should you need assistance, we at the Law Offices of Albert Goodwin are here for you. We have offices in New York, NY, Brooklyn, NY and Queens, NY. You can call us at 718-509-9774 or send us an email at attorneyalbertgoodwin@gmail.com.