Writ of Garnishment in Florida and What to Do About It 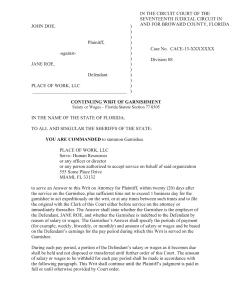 If you had a writ of garnishment in Florida issued to your employer against your wages, it means that your wages are about to be garnished by someone who claims to have won a lawsuit against you. You should contact an attorney right away in order to protect your rights. You can call the Law Offices of Albert Goodwin at 718-509-9774.

A writ of garnishment in Florida is a writ issued by the clerk of court to persons holding or possessing money or property of a debtor (also called the garnishee), upon motion by a creditor, directing the garnishee to hold the debtor’s assets in favor of the creditor. Typical garnishees include the bank where a debtor has his bank accounts or an employer who pays the debtor’s wages.

Writs of garnishment are normally issued after judgment has been made in favor of the creditor, but it can also be obtained pre-judgment. The procedure for garnishment is governed by Chapter 77 of the Florida Statute. The debtor may avail of several exemptions from the writ of garnishment in Florida, but it is very important to timely raise these exemptions. In this writ, a debtor is only given one chance to defend his exemptions. For this reason, if one finds himself in a situation where his wages or bank account have been garnished, it is important to immediately get the services of good Florida lawyer in order for the debtor to protect and preserve his rights and assets.

Defenses to a Writ of Garnishment in Florida

A writ of garnishment in Florida is issued to the garnishee and served by the US Marshal or another person specially appointed by the court (normally another law enforcement officer). For corporations, service must be made to the president, vice president, an officer, or any person authorized to accept service on behalf of the corporation. If an individual’s wages are being garnished, service can be made to the paymaster. The officer who made the service will execute a return that describes the actual manner and procedure used to serve the writ.

Upon service of the writ of garnishment in Florida, the garnishee is given 20 days to answer on whether he possesses property of the debtor. Within 5 days from receiving the garnishee’s answer, the creditor must mail a copy of the garnishee’s answer and a notice advising the debtor that he has 20 days to move to dissolve the writ. The debtor and any third party claiming ownership interest in the property may file a motion to dissolve the writ. For pre-judgment writs, the debtor can raise the defense of the reasonable probability that the final judgment will be made in the debtor’s favor.

Upon receipt of the first notice of garnishment, the debtor is also given 20 days to file his claim for exemption. If the creditor fails to timely contest the debtor’s claim of exemption within 8 days (for personal delivery) or 14 days (for mail service), the clerk of court shall automatically dissolve the writ of garnishment in Florida. This claim for exemption should include a request for an immediate hearing, where the debtor can prove that the property being garnished is exempted from payment of a court judgment.

State and federal laws provide for exemptions of properties and assets that cannot be used to pay for court judgments. The debtor has one opportunity to present his case in court that the property being garnished is exempt. For this reason, it is important to have good Florida lawyer to help him in this aspect.

Under Florida Statute 222.11, a debtor’s wages are exempt from a writ of garnishment in Florida if he is the head of the household. A head of the household is a person who pays at least 50% of the living expenses of a dependent. The dependent need not be a child, but could also be a parent, aunt, uncle, or even a former spouse receiving alimony. If the debtor is not the head of a household, he may qualify for federal wage exemption. Under federal law, 15 U.S.C. 1673, the garnishment cannot exceed 25% of the debtor’s disposable income, unless the disposable income exceeds 30 times the federal minimum wages. In the latter case, the garnishment will be limited to the lesser of either 25% of the debtor’s net wages or 30 times the federal minimum wages per week.

It’s always wise to consult with a Florida lawyer when filling out the claim of exemptions because the debtor only has one chance to prove these claims.

Should you ever find your salary garnished or properties attached, we, at the Law Offices of Albert Goodwin, are here for you. We can protect your rights to defend yourself against a writ of garnishment in Florida. You can call us at 718-509-9774 or send us an email at attorneyalbertgoodwin@gmail.com.