How People Get Caught Lying on a Medicaid Application 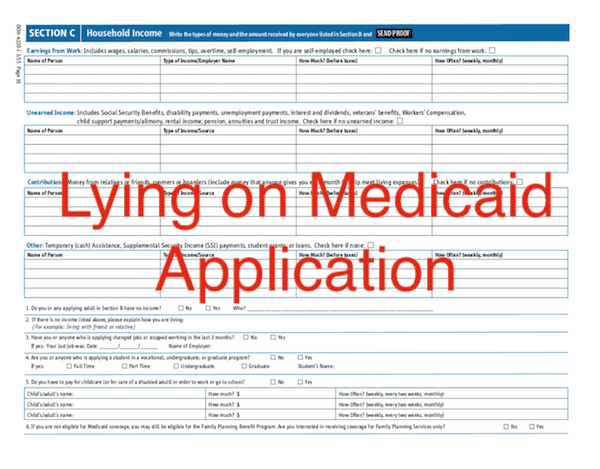 If you are lying on a Medicaid application, you will eventually get caught. There are multiple signals that can get you caught lying to Medicaid. Medicaid is run by the government, and the government frequently cross-references their Medicaid recipient databases with databases that contain people’s income, asset and household information.

Some of these databases include

If you are being accused of Medicaid fraud and you are looking to consult with an attorney, you can send us an email at attorneyalbertgoodwin@gmail.com or call us at 718-509-9774.

Register of Deeds has records of your property ownership, which can indicate that you are receiving rental income or that you are a part of a household.

A Declaration of Corporation can get you caught lying on a Medicaid application because it indicates that you are receiving business income, including cash income, that you are not reporting to Medicaid.

Using Medicaid outside of the state you are receiving it in can indicate that you don’t qualify for Medicaid in that state. For example, if you are using New York Medicaid in Florida, it can be a sign that you are not a New York resident and are lying on the Mediciad application.

If any of those databases receive a hit, the computer will alert the DSS IREA BFI (Department of Social Services Bureau of Fraud Investigations). A supervisor will review the signal and if appropriate, assign your case to a human investigator. The investigator then will start an investigation to determine whether or not you are actually lying on the Medicaid application. If they determine that you are lying, they will gather enough evidence to secure a criminal conviction.

After the Medicaid Fraud investigator has conducted the investigation and gathered all the evidence they can, they will then send you a letter asking you to come in for an interview. By that point, they typically have enough evidence for a criminal conviction, and are just trying to get you to admit that you have committed Medicaid Fraud.

Don’t think you can fool HRA investigators. They probably already have the evidence of you lying on the Medicaid application. They have whatever information triggered the investigation. That’s why they have sent you a Medicaid fraud investigation letter. They’ve probably interviewed the institution where that information came from, such as a bank, school, place of work, or government agency. They probably already have documents that show that you are not eligible.

On the flip side, maybe the HRA does not have enough information of you lying on the Medicaid application, so they are trying to get it from you. But it is also possible that they are trying to get you to lie, to add obstruction of justice as an extra criminal charge. You don’t want to be taking those chances.

You have the right to remain silent. But not to lie to Medicaid investigators.

People get caught lying on a Medicaid application every day. If you received a letter from the HRA DSS IREA BFI, speak to a Medicaid Fraud lawyer today. We at the Law Offices of Albert Goodwin are here for you. We have offices in New York, NY, Brooklyn, NY and Queens, NY. You can call us at 718-509-9774 or send us an email at attorneyalbertgoodwin@gmail.com.