What Does Per Stirpes Mean 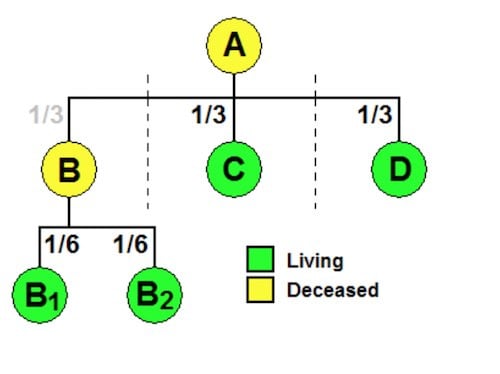 Per stirpes is a legal term used in estate planning and estate distribution. It determines how an estate is distributed between descendants who are in the same generation (they are each other’s cousins).

In New York, prior to September 1, 1992, per stirpes was the default rule used when someone died without a will (otherwise called dying intestate). After significant amendments to the Estates, Powers and Trusts Law (EPTL) were passed, EPTL changed the default intestate rules in New York to by representation. In insurance contracts, however, the default rule is per capita.

To understand what per stirpes means, it is important to also know what per capita and by representation mean.

Per stirpes vs. per capita vs. by representation

“§ 2-1.2 Issue to take per capita, per stirpes or by representation

(a) Instruments executed prior to September first, nineteen hundred ninety-two. Whenever a disposition of property is made to “issue”, such issue, if in equal degree of consanguinity to their common ancestor, take per capita, but if in unequal degree, per stirpes, unless a contrary intention is expressed.

(b) Instruments executed on or after September first, nineteen hundred ninety-two. Whenever a disposition of property is made to “issue”, such issue take by representation as defined in 1-2.16, unless a contrary intention is expressed.”

The above provision, in layman’s terms, simply means that, in an instrument prior to September 1, 1992, when a disposition of property in a will is made to “issue” without any further description, it is considered per capita if all the issue (another term for descendants) are equal in degree of consanguinity to the deceased ascendant. If they are unequal in degree (meaning some are children while the others are grandchildren), then the disposition is per stirpes. On the other hand, for instruments executed on or after September 1, 1992, any disposition of property made to descendants is considered by representation unless stated otherwise.

Per stirpes, under New York law, simply means that when one makes a disposition per stirpes to his children, all the children receive equal shares. If a child has predeceased the parent, then the child’s children will take the child’s share. This used to be the default rule in New York intestate laws prior to 1992, but it has been replaced to representation from 1992 onwards. If one prefers this regime, it must be stated in the will, together with the disposition.

An example will be an easier way to understand what per stirpes means. We are in the year 2021, and Alex and Alexandra have three children, Mary, Cary, and Barry. Mary has two children, Justin and Hailey. Cary has three children, Kim, Kourtney and Khloe. Barry has one child, Taylor. Alex died in 2021, and in his will, he stated that his children, Mary, Cary, and Barry will receive $300,000 per stirpes. Mary died in 2019, before the death of her dad, Alex. How much will each receive under the per stirpes rule?

EPTL § 1-2.11 defines the per capita distribution. In per capita, each person shall take in his own right. If the person predeceases the testator, the predeceased descendant’s children have no right to inherit their predeceased parent’s share. This is the default rule in insurance policies if you designate two or more beneficiaries.

Let’s use the same example above, and see how distribution is different under the per capita regime. In this case, Alex dies, leaving his children, Mary, Cary, and Barry $300,000 in his will per capita.

If Mary predeceases Alex, Mary’s children, Justin and Hailey, do not get anything, because in per capita, a person should inherit in his own right. Thus, Cary and Barry will share $150,000 each.

If both Mary and Barry predecease Alex, Justin, Hailey, and Taylor, still do not get anything. In this case, Cary, alone, will get $300,000.

EPTL § 1-2.16 defines distribution by representation. This is the default rule in New York intestacy. You can see this in EPTL § 4.1-1 where descent and distribution is provided when a person dies without a will.

Using the same example above where Alex dies, and in his will, he states that his children, Mary, Cary, and Barry, will receive $300,000 equally by representation, how much will each get if Mary predeceased Alex?

In this case, Cary and Barry get $100,000 each, and Mary, who has two children, Justin and Hailey, will get an equal share each of $50,000. We get the same result as per stirpes, but this will not always be the case.

In case Mary and Barry predecease Alex, Cary gets $100,000. The share of Mary and Barry are combined to form $200,000. This $200,000 shall be divided equally between Mary and Barry’s three children, Justin, Hailey, and Taylor at $66,666.67 each. The children do not step up to inherit their parent’s share, but instead, the predeceased descendants’ shares are combined so that each person in their class (in this case, the grandchildren) will receive an equal share each. We get a different result from per stirpes.

Choosing an Option that is Right for You

Knowing what per stirpes means (including per capita and by representation) and where these terms are used as default rules will allow you to choose which regime is right for you. Although there is a default rule, one can express a contrary intention in his will or designation of beneficiary. This will help you in planning the estate accurately so that the people you want to inherit from you will receive exactly what you decide to give to them. Should you need assistance or counsel, we, at the Law Offices of Albert Goodwin, are here for you. We have offices in New York, NY, Brooklyn, NY and Queens, NY. You can call us at 718-509-9774 or send us an email at attorneyalbertgoodwin@gmail.com.