The Difference Between Per Stirpes, Per Capita and By Representation

Before looking at per stirpes vs per capita, you should know that there are three basic ways inheritance can be split up between among people in one generation of a bloodline:

It is important to know the difference between not only per stirpes vs per capita, but also between the two of them and the last item on the list above. The last item, the one with the longest and most ambiguous name, is the one that matters most – per capita by generation, also known as per stirpes by representation. This is why it’s the most important:

Per stirpes by representation, also known as per capita by generation is the default New York provision 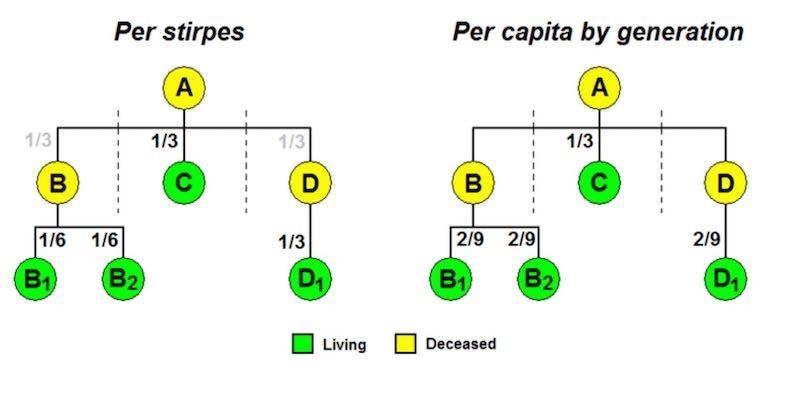 Per stirpes by representation, also known as per capita by generation, is the default New York provision, which is in effect unless otherwise specified in a will or a trust. The predeceased beneficiaries’ shares at the same generation are divided equally between their children. For example, when one beneficiary had two children, and the other beneficiary had five children, all eight children of the two beneficiaries get equal shares – the two “shares” are divided by eight. If you don’t specify otherwise, this is how your children will inherit.

The irony about trying to find out the difference between per stirpes vs per capita is that per stripes by representation is the same thing as per capita by generation.

The New York Default Provision can be Modified by a Will

You can change the New York default provision if you want. Here are some examples as to how you can set up your will:

New York law provides that if the initial gift is from a parent to a child, then the child’s descendants may inherit the gift if the child is not living at the time of the death of the parent. In other words, this gives the descendant’s child (grandchild of the decedent), the right of representation to inherit even if the descendant is not a named beneficiary in the decedent’s will.

However, when there are many descendants involved or the descendants have children of their own, questions over who is entitled to inherit the gift initially gifted to the descendant’s child can get quite complicated and confusing. Therefore, before you decide to make a will or trust and gift your assets, it is important to understand the different ways of modifying the New York default provision as part of your estate planning. You want your beneficiaries to be able to inherit the way you intended.

Classic Per Stirpes and Per Capita

You may hear references to the terms “per stirpes” and “per capita,” which are common Latin terms used in New York Last Wills and Testaments as well as Revocable Living Trusts to describe how property is to be given to one’s beneficiaries and heirs. Here is the difference between classic per stirpes vs per capita:

Per stirpes means that the beneficiary who has the closest relationship to the testator/decedent will receive an equal share of the decedent’s assets. However, if the beneficiary dies before the testator and the testator does not make a new will, then the deceased beneficiary’s descendants (children) inherit by representation of what their deceased parent would have been entitled to inherit.

As an example: If you leave your daughter all your assets, and your daughter dies before you, your daughter’s two children would share in the inheritance that your daughter would have been entitled to had she survived you. Per stirpes is used more often in New York estate planning to avoid having to change a will every time a beneficiary dies before the testator. However, you always have the option of updating or changing your will at any time during your lifetime.

As an example: If you leave your assets to each of your four children, and one of your children predeceases you, the other three children will share equally in the distribution of your assets after your death. The descendants of the deceased child will not be entitled to inherit their deceased parent’s share.

When gifting assets to children and their descendants, it is essential to gift the assets properly to avoid triggering the generation-skipping tax that may occur when your children and grandchildren or great-grandchildren survive you and inherit your assets concurrently.

The best way to avoid making any costly mistakes in your estate planning and in figuring out issues such as per stirpes vs per capita is to speak with an experienced New York estate attorney.

If you wish to speak to a New York estate attorney, we at the Law Offices of Albert Goodwin are here for you. We have offices in New York, NY, Brooklyn, NY and Queens, NY. You can call us at 718-509-9774 or send us an email at attorneyalbertgoodwin@gmail.com.

I finally received my rightful share, only after Mr. Goodwin used his intelligence, observational skills & foresight to win.