The difference between Legatee, Devisee, Distributee and Beneficiary 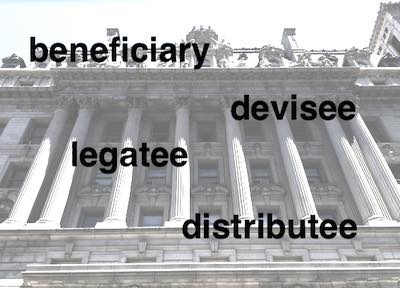 Legatee, devisee, distributee, and beneficiary seem like synonyms, but they are not. They have crucial distinctions. Let’s start with the basic definitions:

What is a distributee? A person who is entitled to inherit from the person who died in the absence of a will. SCPA 103(14) defines a distributee as follows: “Distributee. Any person entitled to take or share in the property of a decedent under the statutes governing descent and distribution.”

What is a devisee? A person who receives real estate, such as a house from a will. In contrast, a legatee is someone who receives chattel, or personal artifacts such as art, stocks, cars, and bank accounts. So, what is a legatee? – Someone who receives specific property. The same person could qualify as both a legatee and a devisee in a will. This distinction existed in common law, and remains to this day, though the more modern statutory provisions displace them with the term “beneficiary.” Nevertheless, a statute’s application turns on the written language.

What is a beneficiary? That’s a broad term, which combines a legatee and a devisee into one. A beneficiary has other connotations as well. In a trust, a beneficiary is someone who receives distributions from the trustee.

For example, a decedent bequests his house to Bob and his heirs, with the following condition: “as long as Bob is married, and if not to Cathy and her heirs”. Decedent also devises his art collection to Cathy and her heirs. In this example: Bob is a devisee because he received the house. Bob is also a beneficiary because all devisees are beneficiaries. Cathy is a legatee because she received the art collection—a is still single when the decedent died. And Cathy is also a devisee. She stands to inherit the property in case Bob is single; thus, she has what is known as an executory interest in the property. We consider Cathy a devisee even if she never gets the property because Bob stayed single. Consequently, Cathy is also a beneficiary.

A status of a distributee can change depending on the outcome of a consanguinity and kinship proceeding. For example, in the case of In re Reape,[5] Mr. Reape died intestate. His brother objected to several claimants purported to be Mr. Reape’s non-marital children. Once the court determined one of the claimants to be Mr. Reape’s child, the court threw out his brother’s objections as to the other claimants as well. Initially, the brother had an entitlement to the estate. After a closer relative had his claim validated, Mr. Reape’s brother lost all standing and any rights to the matter. In Reape’s case, the non-marital child is a distributee.  The brother thought he was a distributee, but turned out not to be one.

New York’s estate law is complicated. The statutory application of estate distribution applies to a singular recipient or a class of types of recipients. Those complications are due to a combination of old common law terminology and modern definitions.

Understandably, this terminology can be hard to parse. It is always best to speak with a New York estate lawyer about your status and potential options. We at the Law Offices of Albert Goodwin are here for you. We have offices in New York, NY, Brooklyn, NY and Queens, NY. You can call us at 718-509-9774 or send us an email at attorneyalbertgoodwin@gmail.com.

This is a great estate lawyer, helped me every step of the way.