Can Cousins Inherit Under an Intestacy

Cousins can only inherit under an intestacy if the person who died did not have a living wife, children, parents, siblings, nieces or nephews, and aunts/uncles. The amount each cousin inherits depends on how many other living cousins the decedent (person who died) had at the time of his death.

If you would like a consultation about cousins inheriting under an intestacy, you can send us an email at attorneyalbertgoodwin@gmail.com or call us at 718-509-9774.

The Surrogate’s court uses a kinship proceeding to determine the heirs of a person who died without a wife, children, siblings, parents aunts or uncles. Such heirs are typically cousins.

Your attorney will gather evidence to prove that you are the niece, nephew or cousin of the person who died, and will put together a family tree affidavit supported by evidence of your relationship. The kinship proceeding and will culminate in a hearing where the court referee determines the relatives who will receive the inheritance. After the hearing, the judge will sign off on the report and the person who manages the estate will be able to distribute to you your rightful inheritance from your aunt, uncle or cousin.

To prove your relationship to the court, your attorney will make a family tree diagram. It is a chart of the relatives of the person who died, beginning with your closest common ancestor and including all the people who stand to inherit. It looks like a tree because relatives branch out from the common ancestor. 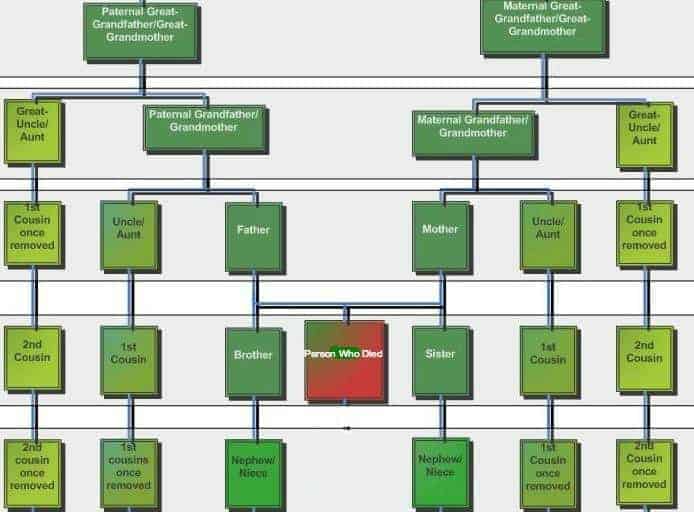 The family tree must include information such as the relatives’ names, relationships to the decedent, dates of birth, and dates of death. Non-marital children are included. The family tree affidavit must be signed by a non-inheriting person familiar with the relationships. Sometimes that’s the attorney, sometimes the genealogist. Each entry in the family tree should have a supporting record. Each record should be numbered and referred to as “exhibit”. Birth certificates, death certificates, court records and social security records are the best, as they are direct evidence. For lack of direct evidence, circumstantial evidence such as census records, immigration records, work records, personal family records can also be accepted under the right circumstances.

Excluding Prior Classes. This process of proving to the court that you actually are a cousin is called a kinship proceeding. In this proceeding, a cousin proves that he is the closest living relative by proving to the court that the decedent’s other relatives died before him. As such, the cousin would have to prove that the decedent’s mother and father died before him, that he was not married or was divorced, that he did not have children or that they died before him and did not have children of their own, that his aunts and uncles died before him, etc. In other words, in order for cousins to inherit, they would have to prove that other relatives never existed or don’t exist anymore, and proving the non-existence of something can be a challenge.

To prove that they are the rightful heirs, the cousins would have to provide the court with documents and testimony. Documents such as death certificates and birth certificates, burial records, Ellis Island records, census records and obituaries are common. Testimony of the cousins themselves and the people who knew the decedent are also useful. The court places a bigger weight on documents than on testimony.

The kinship hearing is like a trial because many of the rules of evidence apply, but it is called a hearing because it’s not completely a trial and takes place before a court attorney-referee, not the judge. A kinship hearing can be over in a day, or it may be broken up into several hearings that take place over a stretch of a few months, with adjournments given as the court determines that more evidence is needed.

At the kinship hearing, your estate attorney will present evidence that you are an heir under intestate succession laws of the State of New York. The evidence presented must comply with New York rules of evidence, including laying the foundation, certification, hearsay rules, and the dead man’s statute.

The People Involved in the Cousin Cases

Unknown Heirs – unknown heirs do not appear in the proceeding while they are unknown. They are searched for by the guardian ad litem, and are also sometimes found by you or your attorney, in which event you have a duty to disclose this information to the guardian ad litem. If any heirs are found, they can appear in the proceeding and become known heirs. If there is a suspicion that there are heirs but they cannot be located, then the public administrator will be required to deposit their share of the estate with the comptroller of the county for safekeeping, [8] which the heirs can claim when they are found or when they find their share through an unclaimed property search (or the money may end up staying with the comptroller forever).

Known Heirs – your relative may have more nieces, nephews or cousins. If that’s the case, then you will have to share the inheritance with the other heirs in your “class,” meaning the other heirs with the same degree of relationship to the person who died.

Genealogist – A genealogist is not required, but can be a big asset to your cases, especially when substantial funds are involved. A good genealogist will help your attorney create a family tree and find all of the available records to prove the relationships. They will testify for you at the kinship hearing.

If the court is not satisfied with the proof that the alleged cousins bring, the court would not authorize the Public Administrator to disburse the funds, instead directing the Public Administrator to deposit the funds with the Department of Finance until the kinship issues are decided. This could be a frustrating process for the cousins, that is why you need the best possible estate attorney you can get if you are a cousin who wants to inherit under intestacy.

Contact attorney Albert Goodwin, Esq., who has more than a decade of experience in kinship and cousin cases. We at the Law Offices of Albert Goodwin are here for you. We have offices in New York, NY, Brooklyn, NY and Queens, NY. You can call us at 718-509-9774 or send us an email at attorneyalbertgoodwin@gmail.com.

Albert Goodwin, Esq. is a great lawyer, helped me every step of the way.

Can Cousins Inherit Under an Intestacy

How to Establish Kinship in New York

Inheriting from a Cousin, Aunt or Uncle