How to Get a Letter of Testamentary

First, an explanation of why the document is called a letter of testamentary

You want to know how to get a Letter of Testamentary, and we will explain how to do that. But for starters, we would like to clarify something important, to clear up some confusion. The document is actually called Letters of Testamentary, and it’s not a letter. It’s a court order.

This common confusion stems from the fact that “Order” used to be called “Letter” hundreds of years ago and the name stuck in courts to this day, even though regular people have long stopped using the word “letter” this way.

Steps you need to take to obtain a letter of testamentary

Since a letter of testamentary is an order, you can only get it from a court. Remember, it’s not a letter, so you can’t write it and your lawyer or anyone else can’t write it for you. Your attorney can get this order from the probate court. If you are looking for an attorney who will represent you in getting a letter of testamentary, you can contact us at attorneyalbertgoodwin@gmail.com.

In order to get a letter of testamentary, your attorney would have to apply to the Surrogate’s Court of the county where the person who died resided. You would need your estate attorney to help you get the documents together. These documents may include the following:

An attorney will also appear in court on your behalf. Both of those are useful things. If you are like most people, you don’t have any experience drafting legal documents or appearing at court hearings.

As an example for your reference, here is a redacted picture of a letter of testamentary obtained by our law firm: 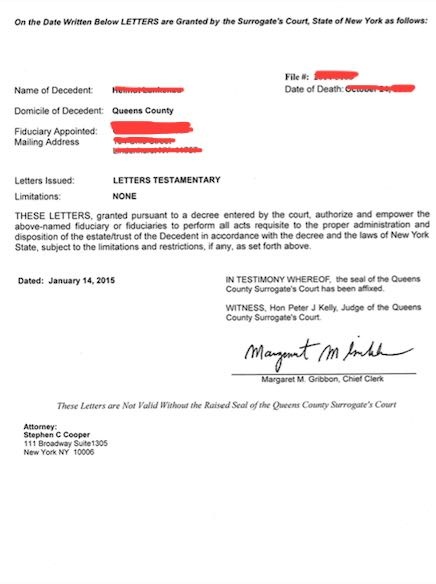 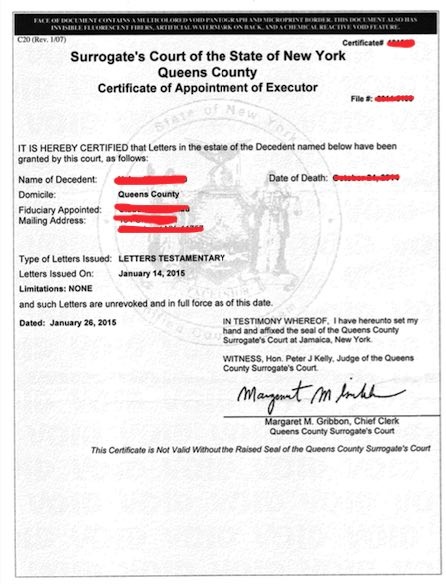 How long does it take to get a Letter of Testamentary

What does a letter of testamentary do

A Letter of Testamentary permits a person to act on behalf of an estate of a person who died with a will. In other words, once a letter of testamentary is issued, you would represent an estate like a president represents a company or a mayor represents a town – you will have the legal authority to make decisions on behalf of the estate. An estate can include a number of people as beneficiaries, just like a company includes a number of people as employees and a city includes a number of people as citizens. As the representative of the estate, you would essentially have the authority to make decisions for them, at least as far as estate matters are concerned.

Those things would be impossible to do without a letter of testamentary. The banks will not give you information and will not transfer the assets, the county recorder will not record property deeds, and a buyer will not buy a property from you.

Who qualifies to receive a letter of testamentary

A person who is nominated by a will to be an executor of an estate does not have the power or authority to act on behalf of an estate until they apply for, and are issued, letter of testamentary by the Surrogate’s Court. In other words, a will may say that you are the executor, but you are not an executor until the court says you are. Just the will is not enough. You do not have the power to represent the estate until the court says so and issues an order (called Letter of Testamentary) that gives you that authority.

To get a letter of testamentary, you not only have to be nominated by the will, but you also have to meet some other minimum qualifications.

You will need a separate letter of testamentary for every state

If you are asking what is a Letter of Testamentary, you may need the assistance of an attorney. We at the Law Offices of Albert Goodwin are here for you. We have offices in New York, NY, Brooklyn, NY and Queens, NY. You can call us at 718-509-9774 or send us an email at attorneyalbertgoodwin@gmail.com.