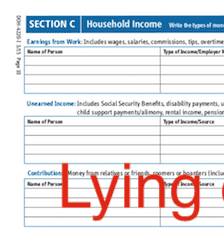 Here is a summary of what can happen if you get caught lying to Medicaid:

If you are caught lying to Medicaid and need a Medicaid fraud attorney, you can send us an email at attorneyalbertgoodwin@gmail.com or call us at 718-509-9774.

You Will Likely be Investigated

New York HRA DSS Bureau of Fraud Investigations catches up with people eventually. If you are caught lying to Medicaid about your income, you are likely to receive a letter asking you to meet with the investigators. If you get a letter from the investigator, speak to a Medicaid/SNAP fraud attorney right away. 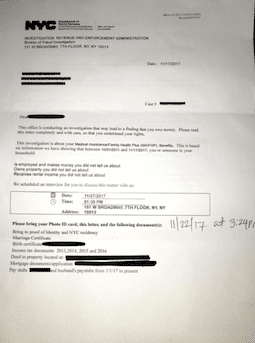 In Some Cases, You Can go to Jail

Restitution. If you are prosecuted by the District Attorney’s office and get sentenced, then you will not only have to go to jail but would also have to pay back the benefits received as restitution.

You Can End Up with a Fraud Felony on Your Record

One of the things that can happen when you get caught lying to Medicaid is you can have a permanent record of a fraud felony. This can be a substantial problem in obtaining employment and maintaining or receiving a professional license. Most companies would not want to hire a person who has been convicted of fraud.

You Will Lose Your Medicaid Benefits

It should come as no surprise that they will cut off your benefits as soon as you get caught lying to Medicaid since you did not qualify for the benefits in the first place.

You can be Disqualified from Medicaid for Life

There could come a time in your life when you would genuinely need Medicaid and will qualify for it. But because of your record of lying to Medicaid, they may have a permanent disqualification on your record, meaning that you will be barred for life from receiving Medicaid for life.

Medicaid Can Sue You to get their Money Back

Not only can Medicaid refer your case to the District Attorney’s office to file criminal charges, but they can also sue you and obtain a judgment against you. Once Medicaid obtains the judgment, they can use it to garnish your paycheck, garnish your bank account, seize your assets such as vehicles and real estate and seize your tax refunds. They will use the power of the government and the courts to recoup the money they’ve spent on your insurance premium payments before you got caught lying to Medicaid.

What do I Do if I Got Caught Lying to Medicaid?

The first step you should take is this: speak with an experienced Medicaid fraud attorney. Do not take the chance of meeting with the investigators on your own. They are trained to obtain information against you that they can later use to their advantage in criminal prosecution and in civil court.

We at the Law Offices of Albert Goodwin are here for you. We have offices in New York, NY, Brooklyn, NY and Queens, NY. You can call us at 718-509-9774 or send us an email at attorneyalbertgoodwin@gmail.com.