Administrator Letter: What it is and how to get one

An administrator letter is an informal name sometimes given to a document issued by the Surrogate’s Court that permits a person to act on behalf of an estate of a person who died without leaving a will. The document is actually called Letters of Administration, and it’s not a letter – it’s a court order. The confusion stems from the fact that Order used to be called Letter hundreds of years ago.

Here is a redacted picture of an administrator letter obtained by our law firm: 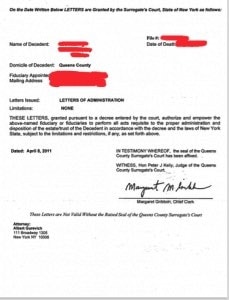 Those things would be impossible to do without an administrator letter. The banks will not give you information and will not transfer the assets, the county recorder will not record property deeds, and a buyer will not buy a property from you.

You often need more than one, since each bank and government agency would require an original. Also, some institutions require a more official-looking document. This is why the court can also issue a Certificate of Appointment of Administrator, which is printed on a watermarked blue paper and looks similar to a death certificate, birth certificate or marriage certificate.

Here is a redacted picture of a Certificate of Appointment of Administrator obtained by our law firm:

Letters of administration are issued when a person died without a will, to a person who applies and is appointed by the court as the administrator of a deceased person’s estate. A person can only be an administrator if they are related to the person who died. The spouse of the decedent gets a preference, followed by children, grandchildren, other descendants, parents, siblings, etc.

How to get an administrator letter

In order to get an administrator letter, you will need your estate attorney to apply for them through the Surrogate’s Court. Your attorney will need to submit the appropriate documents, which may include Petition for Administration of Estate, the original death certificate, notices and citations, copy of the funeral bill, affidavit of heirship, affidavit of family tree, affidavit of due diligence, etc.. There will be a hearing in the Surrogate’s Court whereby your candidacy for the Letters of Administration will be considered by the judge.

How long does it take to get an administrator letter

If you are looking for an administration letter, we at the Law Offices of Albert Goodwin are here for you. We have offices in New York, NY, Brooklyn, NY and Queens, NY. You can call us at 718-509-9774 or send us an email at attorneyalbertgoodwin@gmail.com.