Can I Sue My Employer for Disability Discrimination? 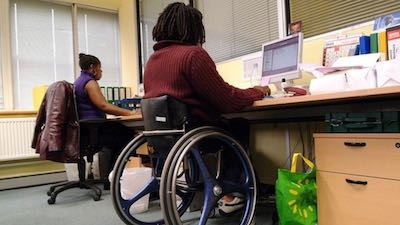 What is disability discrimination?

Disability discrimination occurs when you have been treated differently by your employer due to your disability. In New York, there are several laws that define disability.

The federal American Disabilities Act (ADA) defines a person with a disability as a person who has a physical or mental impairment that substantially limits one or more major life activities, or a record of such impairment, or being regarded as having such an impairment. Major life activities include walking, talking, standing, hearing, seeing, or the operation of a major bodily function, such as the immune, respiratory, reproductive, or circulatory system. A person is not considered to have a disability under the federal ADA law if the impairment has an actual or expected duration of 6 months or less.

When proving disability discrimination, you must show that you indeed have a disability, as defined by law.

Lastly, you must prove that your disability was the reason for the discrimination.

Have you been subjected to disability discrimination in your employment?

There is direct discrimination when you have been singled out and treated differently due to your disability.

There is indirect discrimination when a policy that appears neutral on its face affects a particular class of people with disability.

Failure to provide reasonable accommodations occur when a disabled employee requests an adjustment to his working conditions in order to perform his duties, and the employer fails to provide this adjustment despite it not causing any undue hardship on the employer’s part or fails to engage in a good-faith interactive process in determining that such reasonable accommodation is not available.

Some examples of disability discrimination

For example, you had an alcohol dependency problem but this did not affect the performance of your duties. You were, however, recommended to attend a month-long in-patient detoxification program. You requested for this leave, a reasonable accommodation, which was granted, but while participating in the detoxification program, you were charged with several acts of misconduct arising from absenteeism and lateness. When you returned back from the program, your performance evaluation yielded satisfactory results, but you were terminated due to the several acts of misconduct that arose prior to your detoxification program. Under New York law, alcoholism is a mental disability, a chronic illness that impairs normal functioning. Because at the time of termination, you received a satisfactory performance evaluation, there could be disability discrimination. The relevant time for assessing the employee’s ability to perform is the time of actual termination and not earlier. Matter of McEniry v. Landi, 84 N.Y.2d 554 (1994).

What if you received a job offer and thereafter, required to take a physical and medical examination? In the examination, you were diagnosed as obese, 100 pounds more than the desired weight for your height and age, declared not medically fit to work, and the company revoked your job offer pursuant to a company policy of medical unfitness to work. Your alleged obesity, however, did not affect, in any way, your ability to perform the essential duties of your job. In that case, there is disability discrimination. Div. of Human Rights v. Xerox, 65 N.Y.2d 213 (1985).

While employed in your work for 18 years, you were diagnosed with breast cancer, a serious medical condition. You requested a one-year medical leave to undergo chemotherapy treatments, but you were granted only a 12-week medical leave pursuant to the Family and Medical Leave Act. If you failed to return after this leave, you would be terminated from employment. In this case, because your employer failed to make a clear, fact-specific inquiry about your circumstances and simply denied your request for a year of medical leave because you were not entitled to it, there was no good-faith interactive process whereby you and your employer could clarify your needs vis-à-vis the needs of the business and identify the appropriate reasonable accommodation acceptable to both of you. Without this good-faith interactive process, there could be disability discrimination under the broader protections of New York law. Phillips v. City of New York, 66 A.D.3d 170 (2009).

What if you were a construction supervisor and thereafter diagnosed with a lung problem? You requested protective respiratory equipment to protect you from environmental dust that aggravated your lung problems, but your employer only gave you a dust mask, available in most hardware stores. In this case, the employer could be considered to have failed to provide you with reasonable accommodation under New York law and thus, might have committed disability discrimination. Jacobsen v. New York City HHC (supra).

In New York, you have four options in filing a disability discrimination suit.

Your disability discrimination lawyer will advise you on the best venue to file your claim, depending on the time that has lapsed from the date of the discriminatory act, the location of your employer, and your causes of action.

Most New York lawyers will advise you to file your claims under state law because of the broader protections provided by New York law.

The EEOC only covers employers with at least fifteen (15) employees, while the new amendments to New York human rights laws cover all employers and eliminate the minimum coverage requirement of an employer to have at least 4 employees.

In addition, New York laws not only cover employees but also domestic workers, independent contractors, consultants, vendors, subcontractors, and persons providing services pursuant to a contract, where the employer knew or should have known the discrimination was happening.

Evidence to support your claims

It just becomes a matter of:

In New York, disability discrimination happens quite often and there is a wealth of case law that would help support your position, given the broader protections of both New York state and city human rights law.

When you sue your employer for discrimination, you can ask for back pay, front pay, reinstatement, compensatory damages, punitive damages, liquidated damages, attorneys’ fees, and other court fees and legal costs.

Back pay refers to your wages, benefits, and bonuses that you would have earned without the discrimination.

Front pay refers to lost compensation that you could have received from the time of judgment until reinstatement.

Reinstatement refers to an order by the court directing your employer to re-hire you back to work if you were fired.

Compensatory damages are designed to compensate you for out-of-pocket expenses such as lost wages, the cost of finding a new job, emotional pain, and distress.

Punitive damages are meant to punish the employer for their gross negligence, recklessness or conscious disregard of your rights. This may be awarded when you first notify your employer of the discriminatory conduct, and the employer does nothing about it. This would reflect your employer’s gross negligence or conscious disregard of your discriminatory complaint.

Liquidated damages are usually granted in lieu of the other damages and range up to double the amount of back pay.

For example, under federal law, you have to prove that the employer subjected you to a hostile work environment that is so severe or pervasive that it altered your terms and conditions of employment. Under New York state law, harassment does not need to be “severe or pervasive” anymore. Instead, employers cannot be held liable if the discriminatory conduct is more than petty or trivial. Thus, the standards are lower under state law to prove harassment.

In addition, under federal law, an employer can raise the affirmative defense that the employee failed to use the internal complaint procedure to report a harassment claim. Under state law, this defense is not available.

Moreover, there is a $300,000 limit for compensatory and punitive damages under federal law. Under New York State and city laws, there is no limit.

Because of the more favorable conditions provided for an employee under New York state law, it is recommended to file your racial discrimination claims under New York law rather than federal law.

Suing your employer for disability discrimination involves a complex process of proving certain elements in your case. You need to consult with a disability discrimination lawyer to ensure that your complaint is adequately supported with evidence and that you will be well represented in negotiations with your employer, and ultimately, with the applicable administrative agency or court. Should you need assistance, we at the Law Offices of Albert Goodwin are here for you. We have offices in New York, NY, Brooklyn, NY and Queens, NY. You can call us at 718-509-9774 or send us an email at attorneyalbertgoodwin@gmail.com.