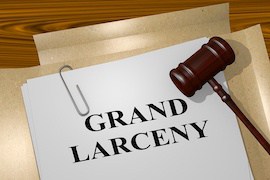 Grand larceny in New York, NY is defined by Penal Law § 155.05 as stealing  property when a person, with intent to deprive another of property or to appropriate the same to himself or to a third person, wrongfully takes, obtains or withholds such property from an owner.

The definition above provides the essential elements of the crime of larceny, and each element has to be proved by the prosecutor beyond reasonable doubt.  A competent grand larceny lawyer in New York, NY will help you identify which element is difficult to prove or has some reasonable doubt, which can give you leverage in negotiating the reduction of the felony’s class or going through trial and dismissing the charge altogether. In essence, the elements are: