How to Get Letters Testamentary 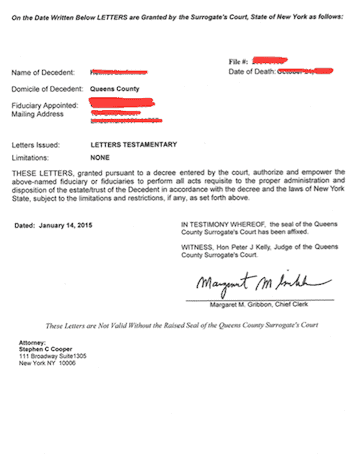 This common confusion stems from the fact that “Order” used to be called “Letter” hundreds of years ago and the name stuck in courts to this day, even though regular people have long stopped using the word “letter” this way.

Steps you need to take to obtain a letter of testamentary

If you are looking for an experienced attorney who can represent you in getting letters testamentary, we at the Law Offices of Albert Goodwin are here for you. You can call us at 718-509-9774 or send us an email at attorneyalbertgoodwin@gmail.com.

Letters testamentary vs. letters of administration

Once you’ve determined that the decedent indeed died with a will, you need to figure out where to file your petition and where to get the letters testamentary. The petition for probate is filed with the county of the Surrogate’s Court where the decedent last resided. It’s important to remember that you file the petition in the county of decedent’s last residence and not where he died.

For example, if your loved one was a resident of New York county, but died in a nursing home in Brooklyn, you file the petition in the Surrogate’s Court of New York County, and not King’s County where Brooklyn is.

What if the decedent lived and died in Florida, but owned a Manhattan apartment? Where do you file your petition? In this case, the principal estate proceeding has to be filed in Florida because this is decedent’s last known residence. However, in order to sell or administer the Manhattan apartment, an ancillary probate petition has to be filed in Manhattan after you receive your letters testamentary from the Florida court.

Now that you’ve figured out where to file your petition, you would need your estate attorney to help you get the documents together. These documents may include the following:

An attorney will also appear in court on your behalf. If you are like most people and you don’t have any experience drafting legal documents or appearing at court hearings, it is better to hire the services of an attorney to handle your petition to ensure that there are no delays in the issuance of the letters testamentary.

As an example for your reference, here is a redacted picture of letters testamentary obtained by our law firm:

You often need more than one since each bank and government agency would require an original. Also, some institutions require a more official-looking document. This is why the court can also issue a Certificate of Appointment of Executor, which is printed on a watermarked blue and red paper and looks similar to a death certificate, birth certificate or marriage certificate.

How long does it take to get letters testamentary

What can letters testamentary do

All of the above would be impossible to do without letters testamentary. The banks will not give you information and will not transfer the assets. The county recorder will not record property deeds. A buyer will not buy estate property from you.

Who qualifies to receive letters testamentary

A person who is nominated by will to be an executor of an estate does not have the power or authority to act on behalf of an estate until they apply for, and are issued, letters testamentary by the Surrogate’s Court. In other words, a will may say that you are the executor, but you are not an executor until the court says you are. You are simply nominated as an executor in the will, but only a court can declare you as an executor by the issuance of letters testamentary. You do not have the power to represent the estate until the court says so and issues an order (called Letters Testamentary) that gives you that authority.

To apply for and obtain letters testamentary, you not only have to be nominated by the will, but you also need to meet other minimum qualifications.

Even if you have been issued letters testamentary, you can still be removed as executor by a beneficiary who claims you have willfully and wastefully dissipated estate property, willfully refused to obey a lawful order of the court, or made a false suggestion of material fact in your application for letters testamentary. You can defend yourself, however, using estate funds, for as long as you are successful in this defense.

If you would like to obtain letters testamentary, you may need the assistance of an attorney. We at the Law Offices of Albert Goodwin are here for you. We have offices in New York, NY, Brooklyn, NY and Queens, NY. You can call us at 718-509-9774 or send us an email at attorneyalbertgoodwin@gmail.com.