Insurance Claim Lawyer: When an Insurance Company is Denying Your Full Claim 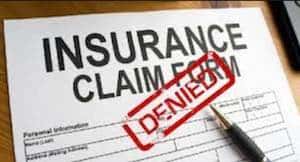 Your insurance claim lawyer can make a claim on your behalf when an insurance company fails you in one of the following ways:

Many people are disheartened to realize that after diligently paying premiums for years, the insurance company, in the end, would deny the claim or pay a small amount of the total claim.
In cases of expensive or complex claims, large claims such as property damage due to fire, tornadoes, or extensive water damage, or claims where fault is hard to establish, it is best to get an insurance claim lawyer to help you, especially when the insurance adjuster doesn’t agree with your claims early on in the process.

However, if the insured can prove that the insurance company acted in bad faith in denying his claim, then an additional cause of action arising from tort occurs. In a tort claim, the beneficiary can claim for an amount higher than that provided in the policy due to the prayer for payment of punitive damages. One may have a cause of action for bad faith against an insurance company.

In Anderson v. Allstate Ins. Co., 2019 N.Y. Slip Op. 02768 (3d Dept. Apr. 11, 2019), the court upheld the provision in the contract stating that suit should be commenced within 24 months after inception of loss. In this case, the statute of limitations began, not when the claim was denied by the insurance company but at the time of loss (which means the happening of the fortuitous event materially adverse to the insured that was insured against). In the case, since the burglary (which was the event that was insured against) occurred prior to September 2014, and the case was filed with the courts on October 2016, the court denied the claim of the insured against the insurance company for being filed outside the period required by the contract.

When To Get a Lawyer

Getting a lawyer at the end of the process when the insurance company denies the claim gives you no other resort than to file a case, which could lead to more expensive costs. Sometimes, a demand letter from a lawyer is sufficient for an insurance company to take your claim more seriously.

Although most lawyers charge an hourly rate for cases, you may find some lawyers who would take your case on contingency basis, especially when your claim is strong. These lawyers would charge a contingent fee of 35% when the claim is settled without litigation, and a higher percentage such as 40% if the claim has to be litigated. The first consultation is normally free, so it doesn’t hurt to ask insurance claim lawyers, especially when you are dealing with large and complex claims.

Insurance companies know that not all people appeal denials. Some companies have made it a business to deny claims in order to increase their profits. If this is happening to you, consult an insurance claim lawyer immediately. Should you need assistance, we, at the law offices of Albert Goodwin, are here for you. We have offices in New York, NY, Brooklyn, NY and Queens, NY. You can call us at 718-509-9774 or send us an email at attorneyalbertgoodwin@gmail.com.