How a Prenup Lawyer Can Help You Protect Your Assets 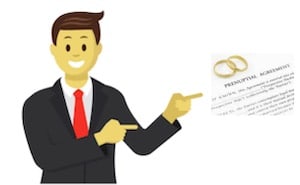 A prenup lawyer will help you draft a prenup agreement in an efficient and effective way. Prenups are not just contracts. With its execution can come a lot of emotional drama between the future spouses, especially when one spouse does not want a prenup while the other wants it.

A prenup lawyer should not only just draft the prenup agreement but should do so in a sensitive manner with the goal of having both parties, happily agreeing on signing the prenup. Because in the end, if the prenup is not signed or the marriage is not celebrated, the prenup is not valid.

If you are looking for a prenup lawyer, we at the Law Offices of Albert Goodwin are here for you. You can call us at 718-509-9774 or send us an email at attorneyalbertgoodwin@gmail.com.

Requirements that a prenup lawyer must observe

To be valid, a prenup in New York must be:

A prenup lawyer may question or challenge a prenup before the court, even if it complies with the above requirements, on the following grounds:

Why you may want to get a prenup lawyer

Although there are many prenup agreement templates on the internet, a prenup agreement should be tailored and customized to your needs, your assets, your debts, and your state law. It even becomes more complicated when the two parties come from different countries or there are assets in different states or countries. Registration might be required depending on the situs of the properties, and this registration is needed as public notice to bind third persons. A prenup lawyer will help you navigate the laws or different laws that apply in your case and draft a prenup agreement that is customized to your situation.

When will a prenup lawyer advise the need for a prenup

If you are in one of the following situations, you may want to consider a prenup:

One future spouse is wealthier than the other.

You have children from a previous marriage.

In New York, the spousal right of election entitles a spouse to the greater of $50,000 or 1/3 of the net estate upon the other spouse’s death. To go around this provision, a future spouse can waive this spousal right of election in a prenup, allowing you to leave a majority of your estate to your children from a previous marriage. If this is not addressed, when you die first before your subsequent spouse, your spouse may inherit most of your property, and when she dies, it goes to her heirs (who are not your children from a previous marriage).

One spouse has a significant amount of debt.

If your future spouse has a significant amount of debt, such as student debt, you might want to get a prenup. Although debt prior to the marriage is considered separate debt, any property and income acquired during marriage is considered marital property in New York. Thus, if you are the higher income earner, in the event of divorce, your spouse will own half of what you both have accumulated during the marriage which can answer for his separate debt. If you want to make sure that your money is not used to pay for someone else’s debt, you need a prenup.

What should a prenup lawyer include in a prenup

The prenup lawyer should draft a prenup that at least addresses the following issues:

If you are engaged to be married and have debt or property, you should discuss with your spouse these financial issues and consider discussing your options with a prenup lawyer. When you have significant debt or property or children from a previous marriage, a prenup lawyer can help you draft a prenup agreement that will prevent a contested divorce, saving you legal expenses in the future.

Should you need a prenup lawyer, we at the Law Offices of Albert Goodwin are here for you. We have offices in New York, NY, Brooklyn, NY and Queens, NY. You can call us at 718-509-9774 or send us an email at attorneyalbertgoodwin@gmail.com.