S Corp vs. C Corp: What are the Differences and Why it Matters 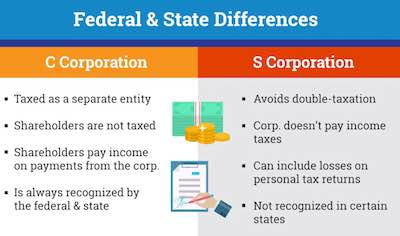 When you want to start a business, the first thing you need to decide on is the type of legal structure you want your business to operate in: sole proprietorship, partnership, limited partnership, limited liability company, or a corporation. There are several differences among these entities, and it is always best to consult with a lawyer regarding the appropriate legal structure based on your goals and expectations of the performance of your business operations.

If you have decided to form a corporation, then you must have heard of an S Corp vs. a C Corp. The differences between these two. are not just a letter. Their main differences can be categorized based on corporate taxation, treatment of losses, ownership, and profit distribution.

Now, the main question remains: why would shareholders elect to be an S Corp vs. a C Corp?

The major difference between an S Corp vs. a C Corp is corporate taxation. The C Corp is taxed on its net taxable income with a tax rate of 21%. If the C Corp distributes profits to its shareholders, that dividend is taxed again. The S Corp, on the other hand, enjoys pass-through taxation. In pass-through taxation, the net taxable income of the S Corp is immediately reported as income by the shareholders in proportion to their percentage of ownership in their US individual income tax return, IRS Form 1040, and other related forms.

In the same way, the C Corp and S Corp differ greatly in the treatment of losses. If the C Corp did not earn any income and sustained losses (meaning their allowable deductions are higher than their taxable income), the C Corp will not pay tax. It may, however, be allowed to carry forward to the next tax period its net operating loss under the IRS provision called loss carryforward.

An S Corp is more restrictive, in the sense that it can only be owned by US citizens and US residents, have no more than 100 shareholders, can only have one class of stock, and cannot be owned by C Corps, other S Corps (with some exceptions), LLCs, partnerships, and trusts. Thus, the S Corp’s stock would have more restrictions to ensure that the stock would not go to an eligible shareholder, which could lead to IRS revoking the S Corp status. C Corps, on the other hand, can be owned by foreigners and other corps, have more than 100 shareholders, and can have multiple classes of stocks.

So, if the company would like to be acquired someday or would like to offer its stocks to the public through an IPO, a C Corp would be a better option.

The S Corp, on the other hand, only has one choice in distributing dividends because it only has one class of stock, which is common stock.

Conversion from S Corp to C Corp. and back

Once a corporation becomes a federal S corporation, the corporation can now elect to be treated as an S Corp under New York laws. Similar to federal law, all of the corporation’s shareholders must consent to the New York’s election.

If you have been seriously thinking about operating a business and wondering what C Corp vs. an S Corp is, we at the Law Offices of Albert Goodwin are here for you. We have offices in New York, NY, Brooklyn, NY and Queens, NY. You can call us at 718-509-9774 or send us an email at attorneyalbertgoodwin@gmail.com.