Testamentary Letter. What is it and How to Get One.

The document is actually called Letters of Testamentary, and it’s not a letter – it’s a court order. The confusion stems from the fact that Order used to be called Letter hundreds of years ago.

If you need assistance from an attorney in obtaining a testamentary letter, you can send us an email at attorneyalbertgoodwin@gmail.com or call us at 718-509-9774.

Here is a redacted picture of a testamentary letter obtained by our law firm: 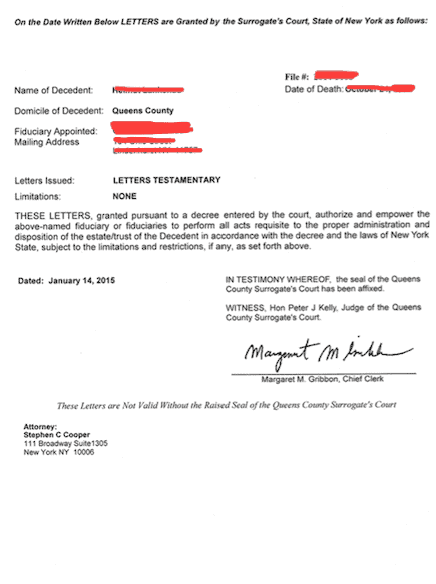 Those things would be impossible to do without a testamentary letter. The banks will not give you information and will not transfer the assets, the county recorder will not record property deeds, and a buyer will not buy a property from you.

How to Get a Testamentary letter

In order to get a testamentary letter, one would have to apply to the Surrogate’s Court of the county where the person who died resided. You would need your estate attorney help you get the documents together, such as the petition for probate, the original last will and testament of the decedent, the original death certificate, a copy if the funeral bill, as well as other documents such as waivers, citation, proposed order, affidavit of heirship, family tree, due diligence, etc., and appear in court on your behalf.

A testamentary letter is issued when a person died with a will, to a person who applies and is appointed by the court as the administrator of a deceased person’s estate. A person can only be an executor of an estate if they are nominated by the will of the person who died and is otherwise qualified – are over the age of 18 and are not a convicted felon.

How Long Does it Take to Get a Testamentary letter

If you need assistance from an attorney in obtaining a testamentary letter, you can send us an email at attorneyalbertgoodwin@gmail.com or call us at 718-509-9774.