What is a Prenup? What’s in it? When is it Used? Can it be Contested? 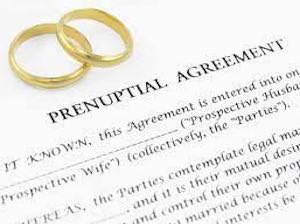 Once you’ve decided to tie the knot with your significant other, you then come across the concept of a prenuptial agreement and wonder, “what is a prenup and do I need one?”

If you are looking for an attorney for your prenup, we at the Law Offices of Albert Goodwin are here for you. You can call us at 718-509-9774 or send us an email at attorneyalbertgoodwin@gmail.com.

Requirements of a valid prenup

To be valid, a prenup in New York must be:

Can a prenup be contested, challenged, canceled or set aside

The prenup may also be questioned and challenged before the court on the following grounds:

What is in a prenup

A prenup addresses many different issues, such as but not limited to:

Typical situations where a prenup is used

A prenup is typically used in these scenarios:

One future spouse is wealthier than the other

One future spouse has children from a previous marriage

In New York, the spousal right of election entitles a spouse to the greater of $50,000 or 1/3 of the net estate upon the other spouse’s death. To go around this provision, a future spouse can waive this spousal right of election in a prenup, allowing you to leave a majority of your estate to your children from a previous marriage. If this is not addressed, when you die first before your subsequent spouse, your spouse may inherit most of your property, and when she dies, it goes to her heirs (who are not your children from a previous marriage).

One spouse has a significant amount of debt

If your future spouse has a significant amount of debt, such as student debt, you might want to get a prenup. Although debt prior to the marriage is considered separate debt, any property and income acquired during the marriage is considered marital property in New York. Thus, if you are the higher income earner, in the event of divorce, your spouse will own half of what you both have accumulated during the marriage which can answer for his separate debt. If you want to make sure that your money is not used to pay for someone else’s debt, you need a prenup.

If you are engaged to be married and have debt or property, you should discuss with your spouse these financial issues and consider what you can put in a prenup. Anyway, these are issues you would also have to address when you are already married. When you have significant debt or property or children from a previous marriage, a prenup will be helpful and will prevent a contested divorce, saving you legal expenses in the future.

Should you need assistance in drafting a prenup, we at the Law Offices of Albert Goodwin are here for you. We have offices in New York, NY, Brooklyn, NY and Queens, NY. You can call us at 718-509-9774 or send us an email at attorneyalbertgoodwin@gmail.com.