What is Child Support For 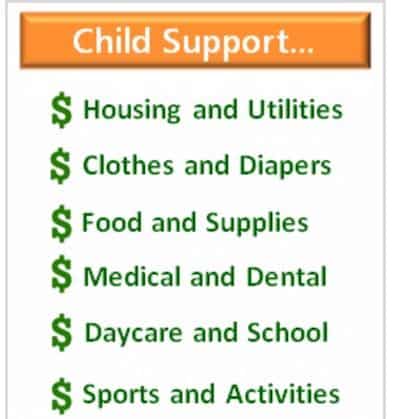 Once a parent is required to pay child support, the parent often wonders, ‘what is child support used for?’ In New York, child support is not limited to food, housing, and clothing, but may also include healthcare, education, childcare, and extracurricular activities. Healthcare refers to the children’s medical insurance premiums and other reasonable healthcare costs not covered by health insurance, such as copays, dental braces, and eyeglasses. Aside from school supplies, education may refer to private school tuition and tutoring services. Childcare services needed when the custodial parent has to go to work can also be factored into child support payment. Sometimes, costs of extracurricular activities, such as participation in sports teams, is also included in child support.

Under the guidelines, the court determines the income of the parent based on their income tax returns. The income includes wages, social security benefits, veteran’s benefits, and unemployment insurance benefits, but excludes supplemental security income. The court will subtract child support for other children and taxes from the income, and then add both parents’ income to arrive at the combined income.

From the combined income, the court multiplies it by a percentage depending on the number of children shared: 17% for one child; 25% for two children; 29% for three children; 31% for four children; and 35% for five or more children. Thereafter, the court divides the amount based on the proportion of the individual income of the parent over the combined parental income.

The child support paid by the non-custodial parent may be increased or decreased by the court depending on certain factors, such as the cost of living in the area where the child lives in, whether the child has special needs, and other considerations. If the combined parental income is $154,000, the court has two options: to use the same formula for all of the combined income or to use the formula only for the first $154,000 and to decide how much of the remainder should be used for child support given the financial resources of the parents, the child’s physical and emotional needs, the tax consequences of the child support, and the child’s standard of living if there had been no divorce.

The amount of child support may be modified if there has been a substantial change in circumstances, three years have elapsed since the order was entered or last modified, or there was an involuntary change in either party’s gross income up or down by 15% or more since the order was entered. However, if the non-custodial parent voluntarily terminates his own employment or accepts underemployment in order to request for a lower child support amount, the court can still impute income to that non-custodial parent. For example, John, who was previously earning $50,000 yearly voluntarily and intentionally resigned from his job to get another job paying $30,000 annually, the court can impute the $20,000 deficit to John if the court believes that John is capable of earning more for purposes of child support.

Child support has several factors to be considered. Although parents can agree on an amount for child support payment, it is best to get the services of lawyer when negotiating this amount. When administrative enforcement processes, such as income execution, unemployment insurance intercept, income tax refund offset, driver’s license suspension, etc.) are not successful, you can file an enforcement or violation petition, requesting the court to enforce the order and collect past due payments.

If you are wondering what child support is for or you are in need of child support representation, we, at the law offices of Albert Goodwin, are here for you. We have offices in New York, NY, Brooklyn, NY and Queens, NY. You can call us at 718-509-9774 or send us an email at attorneyalbertgoodwin@gmail.com.