What is a Tenancy by the Entirety? 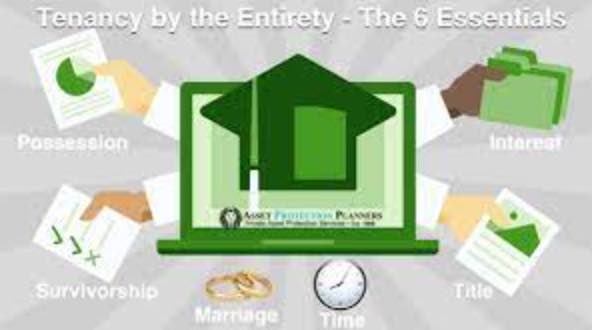 Tenancy-in-common is the default regime among co-owners who are not married to each other. When property is granted to two or more persons and the deed is silent regarding what type of co-ownership exists, the property is co-owned as tenants-in-common, except when the grantees are husband and wife.

Under tenancy-in-common, each co-owner has an individual undivided interest over the entire property. It is an individual interest because the co-owner can sell his interest to a third person, or if the co-owner dies, his interest passes on to the heirs or to the beneficiaries in the will under probate proceedings. It is an undivided interest because each co-owner is entitled to full use and control over the property, and one co-owner, alone, cannot make the decision to sell or divide the property. If one co-owner would like to sell the property and the other co-owners do not agree, the remedy of the co-owner is to file a lawsuit for partition.

Joint Tenancy with Rights of Survivorship

Tenancy by the Entirety

For example, John and Jennifer are friends who decided to purchase a Manhattan apartment together, each contributing 50% to the $350,000 sale price. Apparently, John had a credit card debt of $40,000 which he could not pay. The credit card company placed a lien on the Manhattan apartment for John’s debt and filed a partition proceeding to compel the sale of the apartment to use the proceeds to pay for John’s debt. Jennifer objected, claiming that the credit card company could not force the sale without her consent. Is Jennifer’s position correct? No. Properties owned under tenancy-in-common or joint tenancy with rights of survivorship are not protected from creditors. A creditor can place a lien on the property and force the sale of the property through a partition proceeding in order to use the proceeds to pay for a tenant’s debts. In this case, if the Manhattan apartment is sold for $350,000, $40,000 will go to the credit card company, $135,000 will go to John, and $175,000 will go to Jennifer.

Let’s change the facts a little bit, and now suppose that John and Jennifer are married. John previously owned the apartment prior to their marriage, and after marriage, wanted both of them to own the property. John executed a quitclaim deed, granting to Jennifer ½ of his interest over the Manhattan apartment. John died leaving his ½ interest over the Manhattan apartment to his children from a previous marriage. John’s executor is now claiming the ½ interest, and Jennifer objects, claiming that the property is owned as tenancy by the entirety because they are married. Jennifer claims that when John died, John’s interest automatically passed on to Jennifer, as the surviving spouse. Is Jennifer’s claim correct? Unfortunately, Jennifer’s claim is not correct. The property is not owned by John and Jennifer as tenancy by the entirety, even if they are married, because they did not acquire the property together at the same time. For this reason, John and Jennifer own the property as tenants-in-common, and John can dispose of his ½ interest to his children by will.

Assume, however, that instead of John granting ½ interest over the Manhattan apartment to Jennifer after the marriage, John deeded the property to both himself and Jennifer at the same time, naming John and Jennifer as the grantees in the deed. John then died and left his ½ interest over the will to his children from a previous marriage. Jennifer is now objecting because the property is owned under tenancy by the entirety. Is Jennifer correct? In this case, Jennifer is correct. The property was acquired by the spouses together at the same time as husband and wife. For this reason, the property is owned under tenancy by the entirety, and when John died, his interest automatically passed to Jennifer, as his surviving spouse. John’s children are not entitled to ½ of the Manhattan apartment, even if it was distributed to them via the will.

Due to the different ways in which property is transferred, some people can be confused about the type of co-ownership regime created, especially when the deed is silent. If you have any doubts regarding your property ownership, it is best to consult with a lawyer who can help you plan your estate. Real property is a major investment, and you should be guided accordingly in making decisions about real property.

If you are wondering what tenancy by the entirety is, considering purchasing real property with another person, or wanting to deed half of your property to your spouse, we at the Law Offices of Albert Goodwin are here for you. We have offices in New York, NY, Brooklyn, NY and Queens, NY. You can call us at 718-509-9774 or send us an email at attorneyalbertgoodwin@gmail.com.