What Happens After I Talk With the Medicaid Investigator?

If you are asking what happens after I talk with the Medicaid investigator, the answer is they are going to follow up with you and ask to provide more information and will ask to provide documents. They will continue working the case until they build enough of a case to take to court and secure a criminal conviction.

Some of what happens next is up to you. The most important thing to do is not to panic. If you would like to discuss the situation with an attorney, we at the Law Offices of Albert Goodwin are here for you. You can call us anytime at 718-509-9774.

The investigator may ultimately settle the case with no criminal liability. But they like to build a strong criminal case against you first. Which is something that you would rather do without.

And this is why continuing to speak to a Medicaid investigator is a bad idea. Because you will end up providing more incriminating evidence against yourself.

But ignoring the investigation is also a bad idea, because it will not go away on its own, it will only get escalated to the District Attorney’s Office. That’s because even though they don’t have your testimony, they typically already have enough documentary evidence to build a successful criminal case against you. Here is the kind of evidence they might have:

This is why the best way to resolve a Medicaid investigation is to have an attorney handle it for you. Attorneys are trained to protect your rights.

If a Medicaid investigator sees that you are not following up, they may try to contact you. You can just tell them that you cannot talk to them. There is no need to worry about disappointing the investigator. They understand that remaining silent is your right and that letting you remain silent is a part of their job.

It’s definitely not a good idea to back to them. Then you are just doing their job for them. Have an attorney follow up with them instead.

After you talk to a Medicaid investigator the first time, think about this: was talking to them really a good idea?

An investigator has years of training and experience that you do not have. They have many strategies at their disposal. Here are some examples:

And what strategies do you have? None.

If you continue talking to the investigators, you will crack under the pressure. Everyone does.

Here are some questions that people frequently ask after they talk to a Medicaid investigator:

I did talk to the investigator. Will I go to jail? Some people have gone to jail for Medicaid fraud, and referrals from the Bureau of Fraud Investigation to the District Attorney’s Office are on the rise. But that does not necessarily mean that you will go to jail. Especially if you just started talking to the investigator and they did not yet get the information from you that they need to build their case. What this does mean is that you should speak to an attorney immediately and discuss your legal strategy. Since Medicaid and SNAP fraud is a crime, HRA investigations can be escalated and referred to the District Attorney’s office by the HRA’s investigator. It is crucial to hire a fraud defense attorney who is familiar with criminal investigations, in order to increase your chances of a good defense.

Restitution. If you decided to talk to the investigator, and end up prosecuted by the District Attorney’s office and get sentenced, then you will not only have to go to jail but would also have to pay back the benefits received as restitution.

Do I have to pay back the entire amount? The important thing to remember is that the priority is to avoid criminal liability. Having said that, the amount of payback is also important. In some cases, especially when the total amount is very high, and the beneficiary’s eligibility is questionable but plausible, reducing the amount owed for money expended by the Department of Social Services for Medicaid, Child Health Plus or SNAP benefits may be possible. Some of the ways we do that are showing a period of eligibility. The letter can be an indication of what we are dealing with.

Is there a way to not pay back any benefits and to keep my services and benefits? If we can prove to the Department of Social Services that you were eligible in the first place, then it may be possible to avoid benefit payback, and it may be possible to keep your services and benefits. However, most investigated cases have a solid foundation and are difficult to challenge in a significant way.

Can I pay back the DSS HRA in installments? The investigation department’s priority is to collect as much as they can with as much of it upfront as possible. It is possible in some cases to enter into an installment agreement, with assistance from an experienced attorney. It’s easier to get low installments on Medicaid cases than on SNAP cases. If you got a letter from the HRA and you are looking for an attorney, you can contact us at attorneyalbertgoodwin@gmail.com.

How much does it cost to hire an attorney to represent me during a Medicaid investigation by the DSS/HRA? The fee for a Medicaid fraud or food-stamp fraud attorney would depend on your situation, which will be explained in the letter or during a meeting with the HRA investigator.

Can I get benefits if my situation changed and I am now eligible even though I was not before? You can go to your local Medicaid office and reapply if you have just become eligible, even if you were not eligible before.

We live together, but I am of the opinion that we form separate households, we are two different families, why is the Department of Social Services saying that we are in one household? The DSS/HRA in New York views everyone living in the household as being the same household, even if the people themselves don’t consider themselves that way. The Medicaid administration would be especially concerned if the people in the house are related – let’s say, grandmother or uncle. It’s different if people are just roommates. In a situation where there is a family, especially where the father of the children is not listed on an application or recertification, a fraud investigation is a frequent occurrence.

Albert Goodwin, Esq. is an attorney who helps people who are in situations when they are faced with the possibility of having to talk with a Medicaid investigator. He also represents clients in defending criminal charges associated with Medicaid and SNAP fraud. You can reach Albert Goodwin, Esq. at (718) 509-9774. 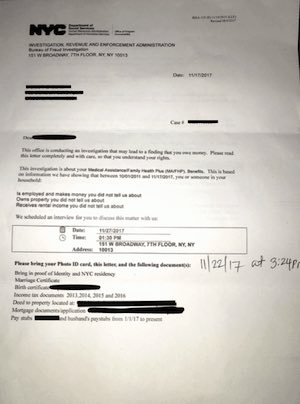