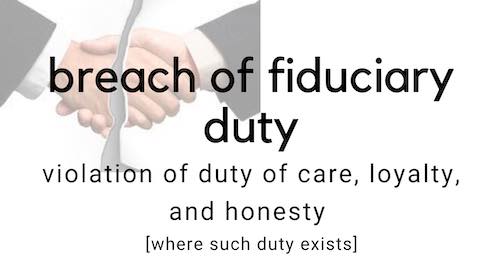 To whom does one owe a fiduciary duty

Generally, there is a fiduciary relationship between an employee to the employer, a corporate officer or director to the corporation, a real estate broker to the real estate owner, partners or joint venture members to each other, agent to a principal, attorney to a client, trustee to the trust beneficiary, executor to the beneficiary, administrator to the distributee, and agent to a principal such as attorney-in-fact to his principal, spouses to one another, and co-tenants to each other. The above is not an exhaustive list. Even without any labels, the court can look into the relationship circumstances of the parties to see if a fiduciary relationship exists between them.

Breach of fiduciary duty as a reason for a lawsuit

When one owes a fiduciary duty to another, such as in the above cases, that person is mandated to always act in the best interests of the other. A violation of this fiduciary duty entitles the other person, not only to seek compensatory damages, but also damages for pain and mental suffering and punitive damages. Punitive damages penalize the wrongdoer in order to deter others from committing the same act. The advantage of being able to request for damages based on pain and mental suffering and punitive damage is that the award can be large.

To prove beach of fiduciary duty, one must prove:

Under CPLR § 3016(b), the actions complained of must be stated with particularity and detail.

What is the fiduciary duty?

The duties a fiduciary can breach are the duties of care, loyalty, and honesty.

A fiduciary has the duty, not only to be honest but also to volunteer all relevant facts in a transaction.

In analyzing the duty of care, courts normally use the business judgment rule. Under this rule, the courts will not hold fiduciaries personally liable even if the decision turns out to be the wrong one, for as long as the fiduciary acted in good faith on an informed basis, with the care that an ordinarily prudent person in the same position would exercise, and in a manner reasonably believed to be in the best interests of its beneficiaries.

Violations of duty of care are also evaluated under the gross negligence standard, not just simple negligence.

The duty of loyalty requires the fiduciary to make their decisions in their professional capacities without personal and economic conflict.

These three fiduciary duties, the duties of care, loyalty, and honesty, are normally intertwined.

Examples of breach of fiduciary duty

Example 1. A trustee invests trust assets to a company owned by his son, despite the fact that such a company is not earning any money. Here, the duty of care, loyalty, and honesty have been breached. First, the trustee breached his fiduciary duty of loyalty to the beneficiaries. The trustee acted with personal and economic conflict of interest by investing trust assets to his son’s company. The trustee breached his duty of honesty to the beneficiaries because he should have volunteered facts about the conflicted transaction to the beneficiaries prior to making the investment. Lastly, he breached his fiduciary duty of care by acting in a manner that is not in the best interests of his beneficiaries and in a way an ordinarily prudent man wouldn’t do. An ordinarily prudent person would not invest assets in a non-earning company.

Example 2.  An executor unreasonably sells the decedent’s house below market value. This can be considered wasteful dissipation of assets if the executor could have sold the house on its appraised value. An ordinarily prudent man would not sell property below market value when someone is willing to buy it at a higher price. The executor can be surcharged for the difference between the market value and the price the house sold for.

Example 4. A trustee was holding stocks of a certain company, for example, Kodak, and did not diversify, then the value of the stocks went down? Can the trustee be held liable? In Matter of Janes, 681 N.Y.2d 41 (1997), the estate assets in 1973 consisted of Kodak stock worth $1,840,000, trading at $139 per share. By 1980, the stock was worth $530,000 at $47 per share. The New York Court of Appeals held the trustee liable for failing to diversify the estate’s stock assets. The Court held that the fiduciary exercised imprudence in negligently retaining assets which it should have sold. The surcharge imposed on the fiduciary was the capital lost (or “lost profit”), computed by determining the value of the stock on the date it should have been sold and subtracting from that figure the proceeds from the sale of the stock. Here, the fiduciary was surcharged the amount of $4,065,029, which included prejudgment interest at the legal rate.

Statute of limitations for breach of fiduciary duty

“New York law does not provide a single statute of limitations for breach of fiduciary duty claims. Rather, the choice of the applicable limitations period depends on the substantive remedy that the plaintiff seeks (Loengard v Santa Fe Indus., 70 NY2d 262, 266 [1987]). Where the remedy sought is purely monetary in nature, courts construe the suit as alleging “injury to property” within the meaning of CPLR 214 (4), which has a three-year limitations period (see e.g. Yatter v Morris Agency, 256 AD2d 260, 261 [1st Dept 1998]). Where, however, the relief sought is equitable in nature, the six-year limitations period of CPLR 213 (1) applies (Loengard, 70 NY2d at 266-267). Moreover, where an allegation of fraud is essential to a breach of fiduciary duty claim, courts have applied a six-year statute of limitations under CPLR 213 (8) (Kaufman v Cohen, 307 AD2d 113, 119 [1st Dept 2003]).”

Thus, in determining whether a breach of fiduciary duty claim has been timely filed, the court will look into the primary relief sought (in case the reliefs requested are both monetary and equitable in nature). If the relief is primarily of monetary damages, then the three-year period applies. If the relief sought is primarily an equitable remedy such as an injunction, an accounting, or return of the property, the six-year period will be used.

Claims of breach of fiduciary duties need to be particular and in detail. It also has to be timely filed. A lawyer with expertise in this field can help make and file a strong claim in your favor or defend you in case the action is brought against you. We have represented both parties in many different cases and are knowledgeable about the different arguments one can raise against the other. Should you need assistance regarding any breach of fiduciary duty, we at the Law Offices of Albert Goodwin are here for you. We have offices in New York, NY, Brooklyn, NY and Queens, NY. You can call us at 718-509-9774 or send us an email at attorneyalbertgoodwin@gmail.com.