How to Contest a Will and Win. Grounds and Strategies. 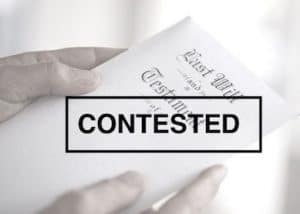 To successfully contest a will, you will need to prove at least one of the following will contest grounds:

The basic test to show mental incapacity is to prove that the testator had issues with understanding one or more of the following:

A will contest based on a lack of mental capacity has a higher chance of success when the testator suffered from a dementia disorder.

Changes in memory and behavior in older adults usually point to dementia. The gradual cognitive decline caused by a degenerative condition eventually results in the loss of mental capacity required to make a will. The more dementia progresses, the harder it becomes to make decisions. Therefore, the later the stage of Dementia, the more likely it is for the will challenge to succeed.

Mental illness in and of itself does not mean that the decedent lacks capacity. For a will contest to work, you will need to prove that mental illness played a role in the making of the will. Some examples of mental illness that can impact the capacity to make a will are:

Personality disorders are not indicative of a lack of capacity. But they can still make some difference in a New York will contest. For example, if the testator had a “Cluster C” Dependent Personality Disorder, then they can be vulnerable to undue influence. We look to symptoms such as

Drifting in and out and lucid moments – Older people may drift in and out, sometimes lucid and sometimes not. If you are contesting the will, you will need to show that the decedent was not having any lucid moment. An attorney who made the will may testify that the testator had a lucid moment when he executed the will.

Some will contest lawyers and medical professionals hold the view that the lucid moment concept is out of date with the modern understanding of mental capacity. Their view is once the testator lost mental capacity, he does not get it back. However, at this time, our courts still consider lucid moments, so this is an important factor to consider in New York will challenges.

Narrowing down the time period – We don’t have to prove that the decedent lacked capacity on the exact day of the will signing. Instead, we can use circumstantial evidence to show that the decedent lacked capacity during that time period.
Obtaining medical records – When figuring out how to contest a will, the most effective strategy for challenging the decedent’s mental capacity is to obtain medical records from the medical providers. You can then go through those medical records and see if any notes point to incapacity. It’s good to check for a list of Alzheimer’s or dementia medications, sedatives and antipsychotics. You can find a list online.
Different forensic and analytical tests will be used to asses the mental capacity of the testator. The decedent might have been administered a Mini-Mental Exam or the Clock Test while they were still alive. After their death, we can no longer give them a test. But we can still try to use models of mental capacity such as PARADISE – 2 to argue that the testator had impaired brain function at the time of the events in question.

It is easier to establish undue influence if the following factors are present:

A common law presumption of undue influence can possibly be established if:

Duress – To prove duress, you would have to show force and coercion. Duress is the use of force, false imprisonment, or threats to compel the testator to make the will a certain way. Duress usually comes hand in hand with other elder abuse. The abuser uses violence or the threat of violence to get a testator to change his or her will in the abuser’s favor.

If somebody forged a part of the will and we can prove the forgery, then we can have the Surrogate’s Court declare the will to be invalid. When figuring out how to contest a will , you will likely need to hire an expert familiar with the different forgery methods. The expert will examine the suspect will, prepare a report and testify in court.

How People Forge Wills – A forgery can either be of the signature or the document. Signature forgery is copying the signature, tracing it, or pasting it from a different document. Forgery of the document is replacing the pages or changing the text.

A forgery trial can easily become a battle of the experts. Getting the most presentable and authoritative expert can make all the difference.

In figuring out how to contest a will based on fraud, we will need to show that the beneficiaries knowingly misled the decedent to make him sign the will. We do that, and the will can be overturned and declared invalid.

Fraud in Factum – One type of fraud is misleading the decedent about the will itself. Beneficiaries slip a will under a guise of a different document or mischaracterize what is in the will and have the testator unknowingly sign it.

Fraud in the Inducement – Another type of fraud is misleading the testator about circumstances outside of the will. They can be fed misinformation about friends and relatives or other things in their lives.

Psychopaths with narcissistic personalities are good at using manipulative tactics. Their favored ways of manipulating vulnerable seniors are

Opportunistic charlatans use those techniques to manipulate trusting older adults into leaving them an unfair share of the inheritance at the expense of the vulnerable person’s family and true wishes.

6. Lack of Due Execution

For a will to be valid, the people involved in the will execution need to follow New York’s formal requirements. If they did not correctly execute the will, we could successfully contest that will, leading to the will being overturned and invalidated by the Surrogate’s Court. In figuring out how to contest a will, you will need to be familiar with the formal requirements of will execution.

The will need to meet the formal requirements, which are as follows:

The people involved have to follow New York execution formalities. Problems can creep up, such as when the testator did not declare the document to be their will, or the witnesses are not there or not fully there. We can use those “hiccups” to litigate a successful will challenge in New York.

There is little place left for ceremony in the modern world. A will execution is one of the few exceptions, and it needs to be followed precisely in order for a will to be valid.

Will Printed from the Internet vs. Attorney-Drafted Will – When a person prints out a will from the internet or fills out a store-bought form, they are playing Russian Roulette with the validity of their will. It is easy to figure out how to challenge a DIY will. No estate attorney would possibly testify to support such a will, because no attorney was involved in making it.

A testator can revoke a will by destroying it or crossing out the signature.

If no one can find the will, we presume that the testator revoked it, unless someone proves otherwise.

A testator can revoke a will by making a new one. The latest will always controls, unless overturned, in which case we revert to the will before that.

When figuring out how to contest a will, we often plead every possible ground for a New York will contest, because there are often multiple things going on that are connected. If the decedent was not well enough to make a will, then he was probably vulnerable to being misinformed or pressured to make a Will.

It is true that in some will contest situations, an opportunity for a win can be spotted early on in the case. We can then proceed with a laser-sharp focus on a single issue. However, the most common strategy is still to plead every possible Will contest ground and see which one of them turns out to be more successful.

If you are researching how to contest a will, contact an estate attorney. You will describe the circumstances of the making of the will and air out the case. An estate attorney can determine whether the proposed objections have merit. Estate attorneys usually request court-supervised depositions of the people involved before deciding whether it is worth your while to invest in a full-blown will contest.

We try to settle will contests before trial. If a settlement is not possible, then the sides will proceed to exchange more documents and information, and ultimately progress to trial. The judge or the will jury decide whether the will is valid.

Remedies for a Defective Will

When your lawyer is figuring out how to contest a will, the court will decide at a trial whether the will is valid. The executor is not permitted to distribute the estate until after the trial. If the court finds the will to be invalid, the court will do one or more of the following:

When it comes to making wills, unscrupulous people can take advantage of vulnerable individuals. Unscrupulous relatives, caretakers and so-called “friends” with ulterior motives prey on people who are physically disabled, cognitively impaired, isolated, confused and depressed. A victim of will fraud often loves, relies on, and fully trusts the person who misleads them. If you believe that someone took advantage of your loved one, you may be able to overturn their so-called “will.” This is done with the help of a lawyer through a will contest in New York Surrogate’s Court.

A will is presumed to be valid unless proven otherwise. If a testator wants to set up their will a certain way, it’s their business. In New York, you can disinherit your relatives if you wish to do so.

You should never go into a will contest without trial counsel. Even though you now have all this information, you will still be at a great disadvantage because you don’t have the experience in contesting a will.

At the Law Offices of Albert Goodwin, we have been litigating New York will contests since 2008. You can get in touch with us by calling 718-509-9774 or by email at attorneyalbertgoodwin@gmail.com.